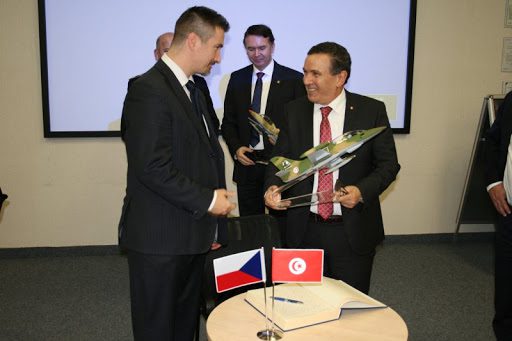 As the Tunisian Air Force twelve Aero Vodochody L-59T Super Albatros advanced trainer and light attack aircraft is approaching the end of its service life, Czech’s Aero Vodochody and United States Textron, is competing for the contract to replace them by the year 2024.

Czech’s Aero Vodochody delivered twelve L-59T Super Albatros aircrafts to the Tunisian Air Force in 1995-1996, since then, they have been used extensively, often for close air support and aerial patrol beside its original role as an advanced training aircraft.

The Aero L-59 Super Albatros is developed from the earlier L-39 Albatros, but has been heavily upgraded with a strengthened fuselage, longer nose, an updated cockpit, advanced avionics (including head-up display), and a more powerful engine.

Thus, Aero Vodochody is now offering its new L39NG to Tunisia, for the reason that the Ministry of Defense has showed interest in the aircraft since 2015.

The Aero Vodochody L-39NG (Next Generation) is a turbofan-powered military trainer aircraft, a successor of the Cold War era Aero L-39 Albatros.

The L-39NG features several design improvements, advanced weaponry, and avionics. The aircraft is already in service with the Senegalese Air Force which ordered for four production models in July 2018 for light attack and training duties.

At the same time, Textron is offering its Scorpion attack and reconnaissance aircraft which it developed in collaboration with AirLand Enterprises.

The Scorpion is a tandem-seat aircraft constructed with an all-composite material fuselage designed for light attack and intelligence, surveillance, and reconnaissance missions.

The Scorpion was designed with a reduced production costs in mind. This was achieved by using common commercial off the shelf technology.

So far, the Textron AirLand Scorpion has not secured any launch customer till date, although, in November 2014, at the height of the Boko Haram insurgency, Nigerian expressed interest in procuring up to a squadron, but the deal fell through as the country opted for the Embraer A-29 Super Tucano instead.

Tunisia is also preparing plans to procure four AT-6C Wolverine light attack and trainer aircraft from the United States after its request for a possible military sale was recently approved.