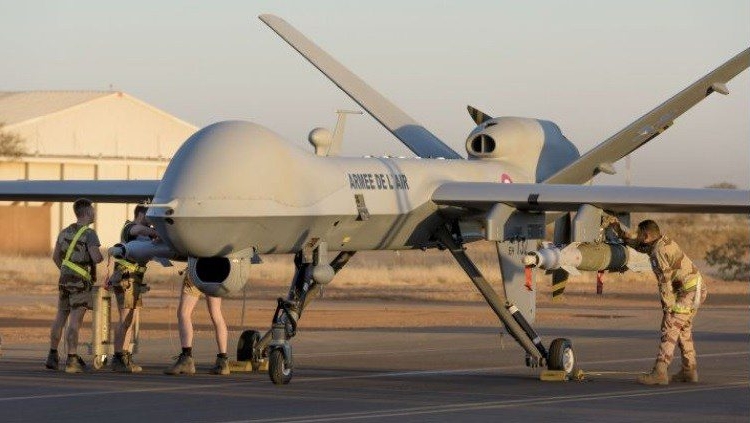 The French Air Force MQ-9 Reaper (Block 5 standard) Unmanned Combat Aerial Vehicle based in the Niger republic have successfully carried out an experimental launch of laser-guided bombs on Thursday, 19 December, to be used in the fight against terrorism.

This experimental launch is part of the ongoing Operation Barkhane counterterrorism operation in the Sahel region. The decision to arm the MQ-9 Reaper drones was first announced on September 13, 2017, during the closing speech of the Defense Summer University.

According to the French Minister of the Armed Forces, Florence Parly, the use of the armed Reaper UCAVs on the battlefield will depend “on the pace of operations and the need of the commander of Operation Barkhane.”

U.S. based General Atomics Aeronautical Systems Inc., was responsible for arming of the French MQ-9 Reapers, in a $ 17.8 million contract spanning two years.

Currently, the French Air Force has a fleet of three UCAV system, with three Reaper per system. Three Reaper UCAV has been deployed to the Sahel in support of Operation Barkhane since 2016.

To further increase its operational capacity, the French Air Force is awaiting delivery of two additional Block 5 standard systems from 2020. These new batch will will have the capacity to carry four 250 kg GBU-12 laser guided bombs.

The new Block 5 standard MQ-9 Reaper drones will have full weapon capacity from the end of 2020, including GBU-12 bombs, Hellfire air-to-ground missiles and also GBU-49 bombs by the year 2021.

French unmanned operations forces are currently grouped within the 33rd Surveillance, Reconnaissance and Attack Wing (ESRA), based on 709 Cognac air base, with a detachment in Niamey (Niger).

The 33rd ESRA comprises of two squadrons; the the 1/33 Belfort equipped with Reaper and the 3/33 Moselle. In 2020, a technical and aeronautical support squadron will be created, as well as 2/33 with the additional Reaper drones.