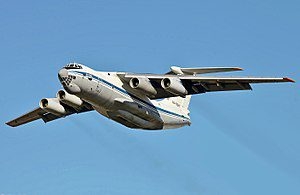 Barely few weeks after the United Kingdom’s Ministry of Defence warned that Russian forces venture into Libya is a strategic move by Vladimir Putin wants to make the war-torn North African nation “his new Syria”, Russian military aircraft have landed at an airport in eastern Libya that has been used as a military base by the United Arab Emirates (UAE).

According to open source ADS-B transponder signals,  two Russian Aerospace Forces (VKS) Tupolev Tu-154M passenger aircraft have flown at least two missions into Al-Khadim airport in Libya. The flights on 17 and 22 October both involved the aircraft landing there as they returned from Khartoum in Sudan en route to Russia’s Humaymim Air Base in western Syria.

On 4 October a VKS Il-76 transport aircraft flew from Humaymim past Crete however, tracking information is not available to determine its destination.

Al-Khadim also known as Al-Kharouba airport, is inside territory controlled by the Libyan National Army (LNA): the most powerful faction in eastern Libya that is led by Khalifa Haftar, who was a general in the 1980s before going into exile.

UAE military aircraft were seen there in 2016 as new hangars and other infrastructures were constructed. The UAE aircraft appear to have flown combat missions in support of LNA operations against Islamist militant factions in Libya.