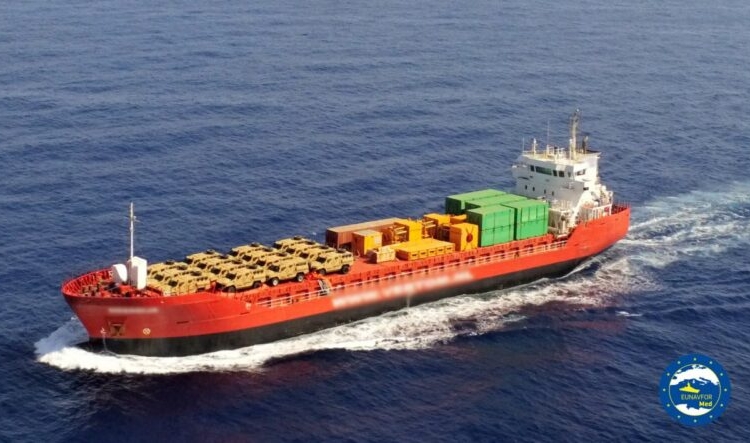 ‘Irini’, continues to enforces the United Nations (UN) arms embargo on Libya, it seized the vessel after a search on the Netherlands-flagged ship Meerdijk off the North African country’s coast. The ship was diverted to a European port and the vehicles were seized.

At least 28 UAE-made BATT UMGs armoured vehicles manufactured by The Armoured Group, were being transported by the MV Meerdijk to Libya in violation of the UN Security Council Resolution (UNSCR) 2292 (2016).

Irini did not identify the vehicles or say how many were found but released photographs showing 15 on the ship’s deck and at least another 13 in its cargo hold.

TAG vehicles have previously been seen in service with the eastern Libyan forces led by Khalifa Haftar, a former general backed by the UAE.

“The ship was found to be transporting vehicles modified for military use to Libya suspected to be in breach of the UN arms embargo,” Operation Irini said in a press release.

“One of the European military vessels operating in the Central Mediterranean Sea for Operation Irini detected the ship on its way to Libya. Upon Operation Irini’s request, in accordance with UNSCR 2292, the Netherlands, as the ship’s flag state, gave its consent without delay for the inspection and, on 11 October, a boarding team was sent on board to verify the nature of those vehicles,” the press release detailed.

“The boarding team discovered dozens of military vehicles shipped in possible violation of the UN arms embargo on Libya. In line with the Operation’s mandate, the vehicles were seized and the ship was diverted to a European port for further inspection. Following the inspection by the UN Panel of Experts, the vehicles were disembarked and stored ashore.”

Ship tracking data shows Meerdijk left Al Hamriyah port in Dubai on 27 September and transited the Suez Canal on 8 October. It was then diverted to Marseille.

in April 2020, member nations of the European Union agreed and approved a new naval mission to enforce the UN arms embargo against Libya. ‘Irini’ replaces the EU’s Operation ‘Sophia’, which formally ended on 20 March of that same year.

This is the second time Irini has seized a cargo in implementation of UN Security Council Resolution. In July, Italian Navy frigate ITS Grecale (F571) inspected the cargo vessel MV Victory Roro (previously MV Luccello) after she was located by a French maritime patrol aircraft. Subsequently, vehicles violating the arms embargo were seized.

Since March 2020, Operation Irini has carried out 25 inspections at sea in accordance with all relevant UN Security Council Resolutions authorising the inspection.