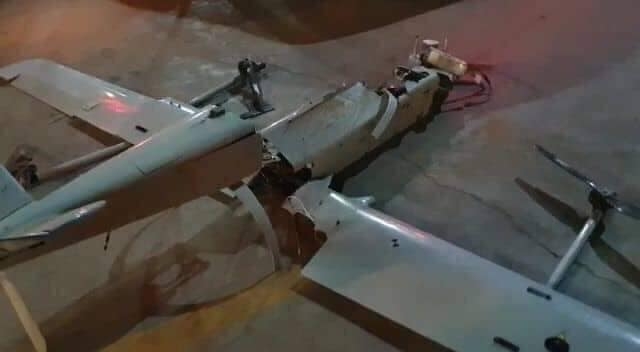 A Chinese-made YFT-CZ35 VTOL fixed-wing UAV likely belonging to the Libyan National Army has been shot down in Libya, according to photographs released on social media.

The YFT-CZ35 VTOL hybrid UAV was brought down over Tarhunah, 65 kilometres to the southeast of Tripoli, in the Murqub District.

Forces of the Government of National Accord (GNA), the United Nations recognized authority in Libya, shot down the YFT-CZ35 VTOL hybrid UAV using small arms fire and heavy weapons.

According to local sources connected to the GNA, the Chinese-made hybrid UAV was conducting a reconnaissance and surveillance operation before it was destroyed.

YFT-CZ35 VTOL hybrid UAV was designed by Digital Eagle, a Chinese based drone company. It can be uniquely flown in a vertical take-off mode while its forward facing propeller pushes the UAV forward.

It is equipped with a gimballed camera system, a GPS transceiver as well as an automated flight control.

Unmanned aerial vehicles (drones) are increasingly being used by both sides, in the ongoing civil war in Libya.

On September 24, a Turkish-made Bayraktar TB2 unmanned aerial combat vehicle operating from the Mitiga International Airport, under the control of the United Nations recognized Government of National Accord (GNA); came under attack by UAE-LNA.