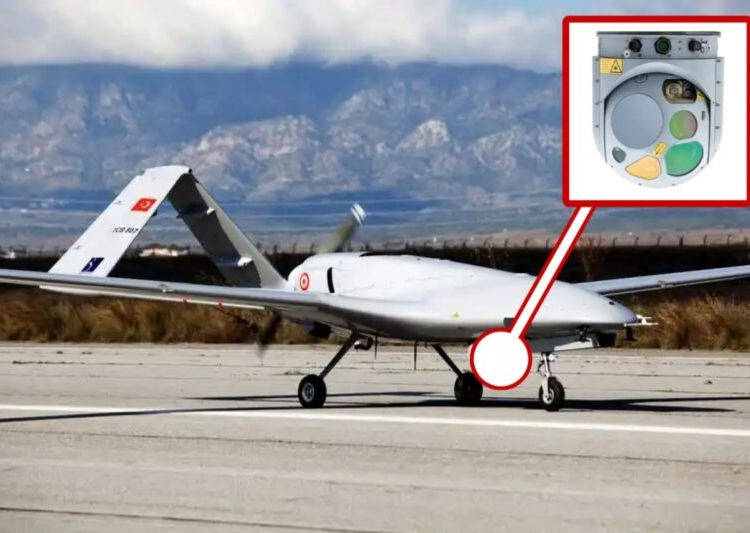 Pakistan, Turkmenistan and Azerbaijan were supplied Hensoldt’s ARGOS-II HDT EO/FLIR Airborne Observation System for their Bayraktar TB2 drones,veven though both countries were listed to have procured either Canadian WESCAM MX-15D, or Turkish Aselsan CATS gimbal on their Bayraktar TB2s.

In September 2020, In the Canadian city of Burlington, activists protested against the L3 Harris WESCAM company for selling technology for armed drones to Turkey.

According to the activists, Ankara uses these drones for serious war crimes such as the targeted killing of civilians. In doing so, the Canadian government is violating the international Arms Trade Treaty (ATT).

The Bayraktar TB2, equipped with the WESCAM MX-15D, is most commonly used by Turkey “for domestic counter-insurgency operations,” according to Project Ploughshares.

Turkey has been a significant customer for Canada’s defence industry.

The Canadian-made surveillance systems played a role in Turkish drone attacks in Northern Kurdistan in 2015 during the military siege of cities where self-governance was declared.

In March 2021, released documents of the Standing Committee on Foreign Affairs and International Development of the Canadian House of Commons revealed that Turkey applied to supply L3 WESCAM for Azerbaijan, the Armenian National Committee of Canada (ANCC) said.

The documents released to a Parliamentary committee showed how Canadian-made air-strike targeting gear ended up in the 2020 Azerbaijan-Armenia conflict in Nagorno-Karabakh, explicitly mentioning the Azerbaijani Airforce as the end-user of the product, ANCC said.

“The Canadian government has a moral duty to categorically deny these permits and send a clear message to Ankara and Baku that Canada will not be complicit in their crimes against humanity,” ANCC said.

Canada revoked the export of the L3 WESCAM MX-15D to Turkey when reports surfaced proving that the Turkish drones were used against Armenians in Nagorno-Karabakh.

Canada had earlier issued export permits in May 2020 for the delivery of seven MX-15D air-strike targeting systems made by L3Harris Wescam to Turkish drone-maker Baykar despite an arms embargo in place since late 2019 that prohibited the export of most categories of military gear to Turkish customers.

Canada also stated that Turkish drones were also used in Libya and that this was a violation of the United Nations’ embargo.

Canada had previously suspended export permits in October 2019 due to Turkey’s operations in Syria, and permits were granted again in May 2020.

Subsequently, stung by the Canadian government’s decision to ban the export of L3 WESCAM MX-15D optics and targeting systems to Turkey, the country’s largest drone producer Baykar announced in April 2021 that they have developed their own technology and no longer need the Canadian devices.

Canadian defence experts say they doubt that Turkey’s domestically produced Aselsan CATS optical sensors are as good as WESCAM’s and argued that Ankara’s repeated attempts to reverse the ban at the highest political levels — which included a personal overture by Erdogan to Prime Minister Justin Trudeau last spring — strongly supports the case.

Citing that ASELSAN CATS is about 20 kilograms heavier than WESCAM’s MX-15 pod installed on the Bayraktar TB2s.

Later in 2021, ASELSAN, the leading company of the Turkish defense industry, announced the completion of their own optical system. In the statement made on ASELSAN’s official Twitter account, “As Turkey’s ASELSAN, we are at the service of our nation with our domestic and national electro-optical reconnaissance, surveillance and targeting system CATS.”

Although, recently delivered Bayraktar TB2 for the Malian Air Force are equipped with the Turkish-made Aselsan CATS camera turret, the replacement for the L3 Wescam MX-15D.

However, Ankara’s customers, including Poland, Pakistan, Azerbaijan and Turkmenistan, were not convinced of ASELSAN CATS’ capabilities, and thus opted for the South African Hensoldt ARGOS-II HDT EO/FLIR Airborne Observation System.