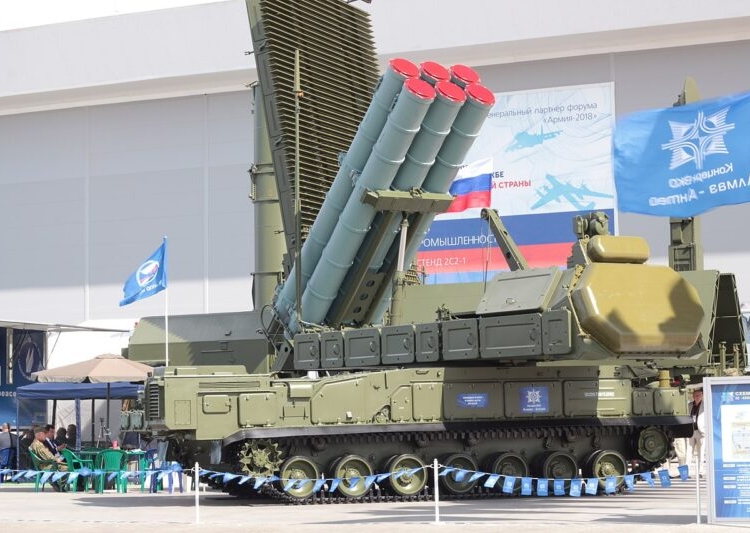 The latest Russian Buk-M3 surface-to-air missile (SAM) system has received commendations from the Russian Ministry of Defense for its battlefield effectiveness and modularity.

Designed, developed, and manufactured by the Russian Defense Company Almaz-Antey, the Buk-M3 “Viking” surface-to-air system features advanced electronic components and a new missile and is significantly different enough from its predecessors to warrant a new U.S. Department of Defense designation — SA-27.

The Buk-M3 employs new 9M317M missiles and electronic components to provide much-improved capabilities compared with the older Buk systems, and according to the U.S. Army Training and Doctrine Command (TRADOC) manual, it “outperforms even the old S-300P long-range air defense system” — the SAM that’s known in the West as the SA-10 Grumble.

The Buk-M3 is modular in design and can be used in conjunction with the Nebo-M radar system, which significantly increases its target acquisition range. It boasts of a new digital computer, high-speed data exchange system and a tele-thermal imaging target designator instead of the tele-optical trackers used in previous models.

“The upgraded SAM system is modular in design. This makes it possible to integrate various components into the system, adding completely new properties to the Viking. For example, in addition to its organic radars, the SAM system can include the Nebo-M, a very powerful radar system. In reality, this means that the SAM system will be able to see air targets at an extended range,” the publication says.

The SAM system’s improved air threat detection efficiency is achieved also through the combination of three-meter-, decimeter- and centimetre-wave radars. As noted in the Military Thought’s article, this bundle of radars detects any aerial target, including a stealth one, regardless of the degree of its radar invisibility. The detection range is up to 600 km thanks to integration with the Nebo-M radar.
The Viking SAM system, an export version of Buk-M3, is offered on the global market.

According to official publications, a battery of Buk-M3 missiles can track and engage up to 36 targets simultaneously, while its advanced 9R31M missile can knock down all existing flying objects, including highly manoeuvrable ones, even during active electronic jamming. The Buk-M3 can also engage sea and land targets, due to its vertical launch capability.

The Nebo-M is a mobile radar system detecting aerodynamic and ballistic targets at medium and high altitudes. It is designed to detect, locate and track various air targets – from aircraft to cruise and guided missiles, including pinpoint hypersonic, ballistic and stealth ones, at a range of up to 600 km in circular scanning mode and up to 1,800 km in sector-scanning mode.

The radar provides friend-or-foe identification of air objects and direction finding of jammers. The system has also been offered for export.

The combat control station of the export-oriented Viking can also be integrated with the radars of non-Russian origin. The system envisages a capability of the autonomous use of the firing sections, which enlarges the total defended area and increases the number of covered sites.

In 2018, Russia declared the launch of the international marketing of the Viking SAM system. In comparison with the Buk-M2E, its range of fire has increased nearly by 1.5 times – up to 65 kilometres.

Besides, the number of simultaneously engaged targets has also increased by 1.5 times, and the number of ready-for-launch air guided missiles in one firing position made of two combat units has grown up from 8 to 18.

In late November, the Russian Ministry of Defense announced, that within the special military operation, a mixed battery of Buk-M3 and Buk-M2 missile systems destroyed about 40 airborne weapons used by the Ukrainian forces.

“The units of the two generations of SAMs operate in a unified air defence system to distribute targets based on range and their tactical and technical characteristics. This makes it possible to increase the effectiveness of the air defence system, preserve the resource and significantly extend the service life of anti-aircraft missile systems.ьAs a result of the combat actions of Buk-M3 and Buk-m2 SAM batteries of the Central Military District, unmanned aerial vehicles, HIMARS multiple rocket launchers and Tochka-U ballistic missiles were shot down,” said the Russian MoD.

Russia is offering the global market air defence systems of different ranges, which can also be integrated with each other providing for a unified and efficient air defence loop.

For example, medium-range Buk and short-range Tor systems can be used in conjunction with the S-400 long-range ADS. In such a network these systems also would provide protection to each other – for example, Tors are especially effective against guided aerial bombs and missiles at short ranges.

Although, the battle for the control of the Ukrainian airspace remains fluid, with both sides still very active and with neither enjoying a true superiority, at least not across a wide area. With that in mind, the addition of the more modern Buk-M3 “Viking” SAM systems will only help the Russians, especially as Ukraine struggles to source Soviet-era equipment to replenish the older systems it already operates.

The Buk-M3 can significantly alter the balance of power in the air war may finally help gain the initiative in the critical aerial battlefield.

A recent official Russian Ministry of Defense video shows a Buk-M3 system in action somewhere in Ukraine and included an interview with the commander who said that the system has already shot down 20 aerial targets, including Bayraktar TB2 attack drones.