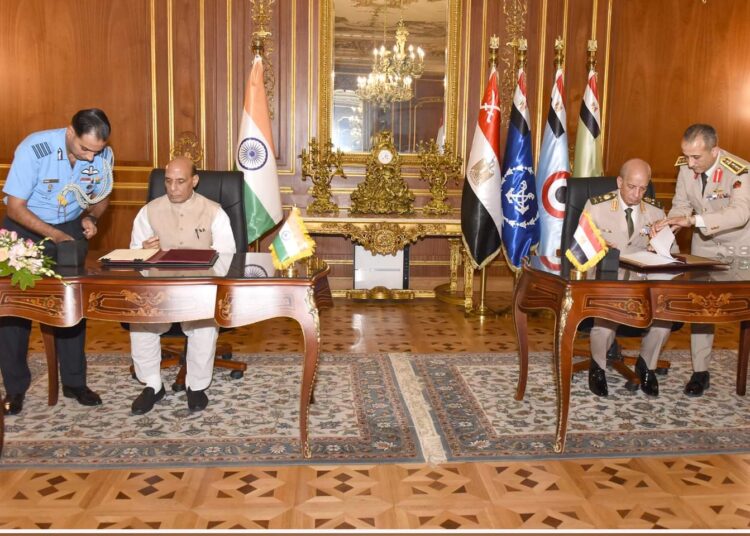 Indian Defense Minister Raksha Mantri Shri Rajnath Singh on 19 September, met with his Egyptian counterpart in Cairo, to discuss and sign a Memorandum of Understanding (MoU) aimed at enhancing military and security cooperation between both nations.

Raksha Mantri Shri Rajnath Singh also met with Egypt’s President al-Sisi, where they discussed cooperation and focus on joint training, defence co-production, and maintenance of equipment and also exchange expertise in countering the threat of terrorism.

During the visit, Egypt’s president El-Sisi pointed out that bilateral relations between India and Egypt are well-established throughout history. He expressed appreciation that military-to-military cooperation between both countries has reached a new level and that the signing of the MoU on defence cooperation is a major achievement.

They emphasized the need for coproduction and to discuss specific proposals in that regard. Shri Rajnath Singh expressed appreciation for the firm stand taken by Egypt against terrorism.

President Sisi emphasized that there is a need for India and Egypt to exchange expertise and best practices in countering the threat of terrorism.

The Raksha Mantri acknowledged that Egypt is among the most important trading partners of India in Africa and that bilateral trade has expanded significantly. He noted with satisfaction the close cooperation in multilateral forums between India and Egypt. Shri Rajnath Singh conveyed his best wishes for the successful hosting of COP27 in November 2022.

The diplomatic visit may likely include a discussion on the status of India’s bid to sell the indigenous Tejas MK1A light combat aircraft to Egypt in a deal that could include setting up a production facility in Egypt.