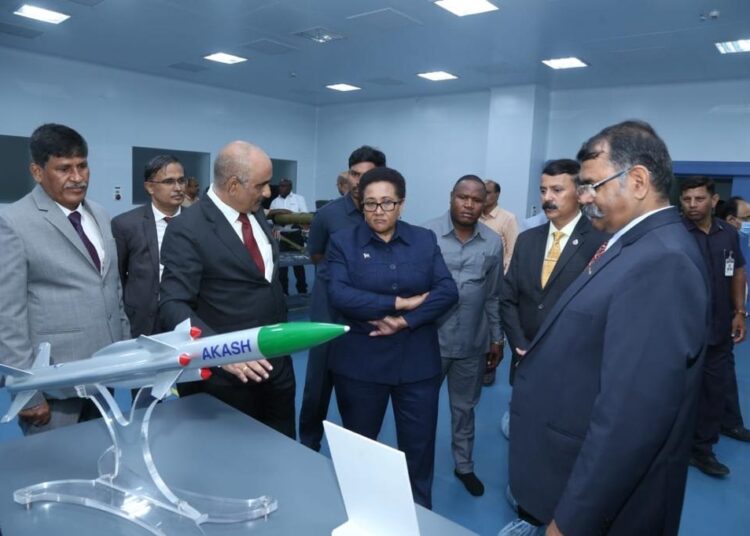 Dr Stergomena Lawrence Tax, Minister of Defence, United Republic of Tanzania being briefed about BDL products during her visit to the Company on 27 Aug 2022.

A delegation from Tanzania visited India to look at the country’s indigenous defence industry, and to explore opportunities for collaboraton. Tanzanian Defence minister Dr. Stergomena Lawrence Tax was herself leading the charge of the delegation consisting of Senior Armed Forces officials. On August 29, they visited the manufacturing facilities of Bharat Dynamics Limited (BDL) manufacturer of ammunition and missile systems.

“Honoured by the visit of HE Dr. Stergomena Lawrence Tax, Defence Minister, Tanzania at BDL today. The visit will further strengthen Defence Cooperation existing between India and Tanzania and will give a fillip to the export of ‘Made in India’ defence products.”

According to a Press release by the BDL, the company is ready to export Anti-Tank Guided Missiles, Surface-to-Air Missiles, Underwater weapons, Counter Measure Dispensing systems, Drone delivered bombs and Drone delivered missiles to the African nation. In a tweet, BDL further wrote, “The visit will further strengthen Defence Cooperation existing between India and Tanzania and will give a fillip to the export of ‘Made in India’ defence products”.

Tanzania and India already have an existing relationship, especially in the area of defence. On 26 August, India and Tanzania agreed on the formation of a task force to prepare a five-year ‘future road map’ for enhancing defence cooperation between both countries and to hold the next Joint Defence Cooperation meeting in Tanzania at an early date. This was agreed upon at the bilateral meeting between Defence Minister Rajnath Singh and the Tanzanian Minister of Defence and National Service Dr. Stergomena Lawrence Tax on Friday.

“A wide range of issues concerning bilateral, regional, and defence industrial cooperation were discussed during the meeting. The two Ministers reviewed the existing military-to-military activities and discussed ways to enhance cooperation in all domains with a focus on defence industry cooperation,” a Ministry statement said.

Mr. Singh also invited his Tanzanian counterpart to the ‘India-Africa Defence Dialogue’ and DefExpo which is scheduled to be held in Gandhinagar, Gujarat between October 18 to 22.