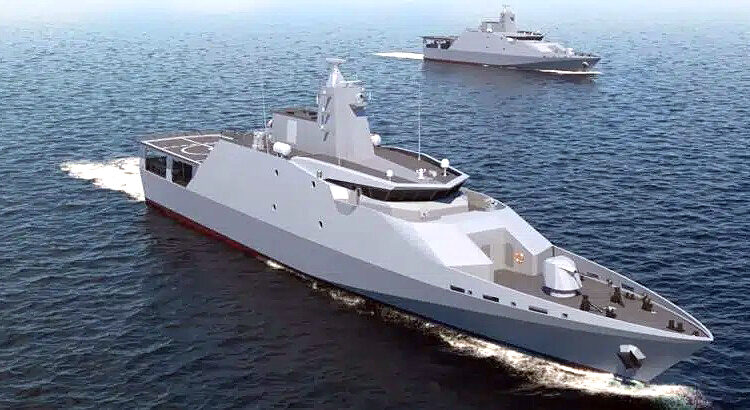 Each ship will cost US$80 Million, and the first payment/prepayment of US$35 Million under the Project was made in June 2022. The ships are planned to be delivered within a 37-month calendar.

Turkish DEARSAN Shipyard officially started the construction of two OPV-76 Offshore Patrol Vessels for the Nigerian Navy with a keel laying ceremony held on September 16, 2022. The OPVs are being constructed as part of a contract signed between Dearsan and the Nigerian Navy in 2021.

The high endurance offshore patrol vessels are configured in line with the Nigerian Navy requirements, which are designed and built entirely in the shipyard’s facilities and will be equipped with modern systems, says Admiral AZ Gambo.

“The vessels will be deployed to project naval power within the Gulf of Guinea (GoG), contribute significantly to enhancing global maritime commerce, deterring oil theft and ensuring secure seas for exploration and exploitation of Nigeria’s maritime and hydrocarbon resources.”

The high endurance offshore patrol vessel OPV -76 has an overall length of 76.90 meters, a beam of 11.90 meters and a displacement of 1,100 tons, according to the video released by the company. The vessel will be operated by 47 personnel and have a range of 2500 nautical miles at an economical speed. HE OPV 76 will be able to stay at sea for 16 days. The ship has a flight deck that can house a single helicopter but no hangar.

The Turkish company HAVELSAN will supply the ADVENT combat management system for the new OPVs, and the operator consoles will be supplied by another Turkish company, YALTES. The sensor suit of the new OPVs consists of the 2D surface search radar from the Italian company GEM Elettronica and the fire control system EO.

OPV-76 ships will be fitted with four MAN product diesel engines (18VP185), and it is stated that the vessels can reach a maximum speed of 28 knots. Constructed in line with the Türk Loydu Ship Classification rules, the hulls of OPV-76s will be made of steel sheets, and marine aluminium (Sealium) will be used in the ship superstructure. The operational range of the ships is stated as 2.500nm (nautical miles). A contract was signed with HeliPLAT Co.Ltd. for the certification engineering, testing, and HAT/SAT activities of the helicopter platform on the OPV-76 ships.

It is uncertain if the NN will still proceed with the procurement of a general-purpose frigate to replace the former naval flagship Nigerian Navy Ship NNS ARADU. However, each OPV-76 warship will cost US$80 Million, and the first payment/prepayment of US$35 Million under the Project was made in June 2022. The ships are planned to be delivered within a 37-month calendar.