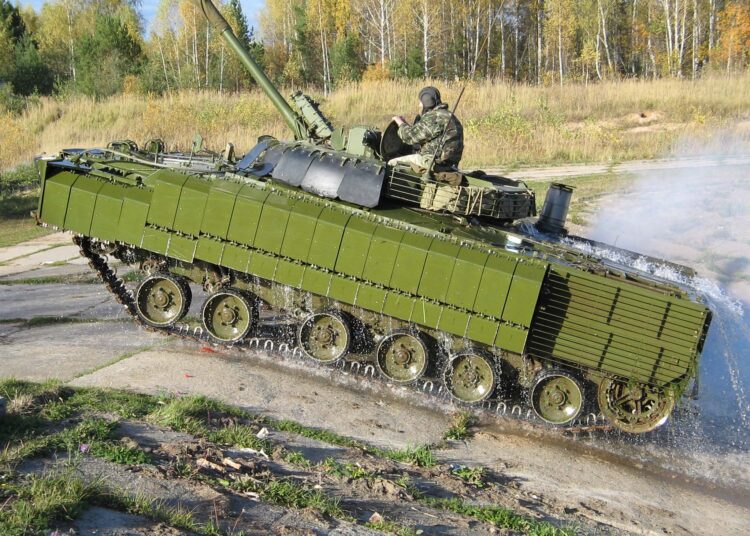 NII Stali showcased its capabilities during the recent Army-2022 defence exhibition in Moscow, Russia. Such innovative products include a cable that protects vehicles from mines and IEDs, and a stealth coating for tanks that reduces their thermal signature, thereby making them near invincible to enemy sensors.

At the ARMY-2022 expo, the Research Institute of Steel, in addition to the Relikt complex, showcased a number of other products, including a hinged dynamic protection system for lightly armored vehicles, an electromagnetic mine protection system, and a system, which reduces visibility thus providing protection against high-precision weapons.

The system of dynamic protection for light armored vehicles created by the Research Institute of Steel, according to the company, is the first such serially produced product in the world. Initially, the system was developed to increase the protection of the BMP-3 IFV against RPGs, small-caliber guns, and small arms, but can also be used to increase the protection of various types of lightly armored wheeled and tracked vehicles of Russian and foreign production. The basis of the system is the 4S24 new element of dynamic protection, which has given the required level of protection and survivability.

To protect against modern anti-tank mines, the Research Institute of Steel has developed and presented at the ARMY-2022 the electronic mine protection system SPMZ-2E, which is capable of changing the magnetic signature of a tank, or shifting it forward so that the mine’s magnetic sensor either does not react to a passing tank or causes a mine to explode in front of it. The system can be installed not only on tanks but also on any other vehicles (infantry fighting vehicles, armored personnel carriers, cars). Structurally, the SPMZ-2E is an electrical cable laid along the perimeter of the vehicle hull and connected to an electronic unit – an inverter installed in the combat compartment. The inverter, in line with a preset program, generates electrical impulses in the cable, which change the magnetic image of the tank, misleading even the smartest magnetic fuses.

Another highlight of the ARMY-2022 expo was the RPM Cape set of optical signature reduction means, designed to significantly reduce the visibility of combat assets, including tanks, in those spectra of electromagnetic radiation in which most reconnaissance and weapon guidance systems operate. Special veils made of radio-absorbing material almost completely hide the tank from reconnaissance radars, significantly reduce its visibility in the infrared range, and make it difficult to detect and recognize the tank. A tank covered with such material becomes really invisible to many reconnaissance and weapon guidance devices, the developer claims.

According to NII Stali, its upper hemisphere protection complex for combat vehicles operates based on the detection of an incoming high-precision munition striking from the upper hemisphere, and disruption of its guidance system by either a powerful electromagnetic pulse or the creation of a multispectral aerosol cloud and false IR targets over the protected object.

Other products of the company include anti-radiation protection for vehicles and crew, mine electromagnetic protection system and device, fire and explosion safety system, and lattice screens to protect the rear end of main battle tanks against rocket-propelled grenades.