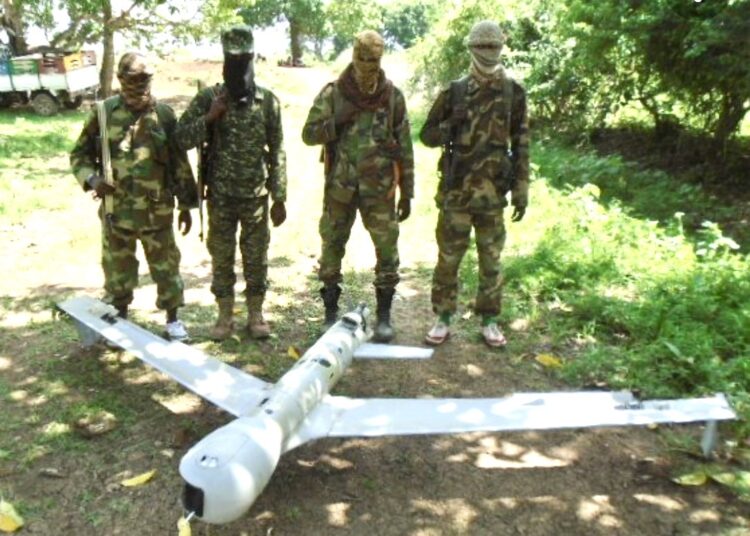 The proliferation of drone technology across Africa has significantly expanded humanitarian, and military operations, although, still an emerging technology in the continent, however, in the hands of non-state armed groups, they pose a significant threat. The combat drone was once the preserve of military superpowers but it’s now in use by insurgents and smaller nations and is already changing the nature of the battle.

Retired Colonel David Peddle, a former military service member in South Africa and the United Kingdom, with ongoing contact in Somalia, confirmed that armed nonstate actors notably Al Shabaab have been using drones for surveillance purposes, and he believes it’s only a matter of time before we start seeing the deployment of ‘clusters’ or ‘swarms’ of drones in Africa, given their accessibility and relatively low cost.

Somali media reported the seized drones could carry more than 30 kilograms and shared similarities to attack drones used by ISIS and the Kurdistan Workers’ Party (PKK). Somali MP Zakariye Mohamud Haji Abdi imported the drones and insisted they are intended for agricultural use in Puntland despite a ban by the state on the use and importation of all drones due to security concerns.

Zakariya Mohamud Haj, said that the drones belonged to him and were used for agricultural purposes. “The drones I imported from Turkey are illegally owned by Human, a company specializing in pest control, irrigation, and all agricultural-related activities. for combating and spraying Anyaha, irrigating crops and identifying areas where rivers are vulnerable to flooding,” said MP Zakariya.”

At the time, Somali’s Opposition presidential candidates say they are worried about their safety after four out of the six drones were later declared missing from a safe house operated by NISA in Mogadishu.

Although the adaptation of commercial drones by insurgents for an aerial attack in Africa is yet to happen, there’s evidence of their use by armed groups for surveillance and precision targeting.

In 2022, Al-Shabaab media claim the group used a drone to film their daredevil 2020 attack on Manda Bay base which resulted in the deaths of US Army Spc. Henry Mayfield Jr., as well as civilian contractors Dustin Harrison and Bruce Triplett. Between 30 and 40 al-Shabab fighters launched an early morning attack on Cooperative Security Location Manda Bay.

On September 4, 2022: Alshabaab released photos of the US-made ScanEagle surveillance drone designed by Insitu. Although photographs from the group suggest that the ScanEagle drones appear not to be in flying condition, nevertheless the propaganda value is significant. The tactical utility of surveillance or commercial drones may be limited as a weapon; however, strategically they could be of use for wider intelligence gathering, collection of footage and propaganda materials and precision targeting.

DeLaurentis made the comments during the UN Security Council Arria-Formula Meeting (informal meeting) on Transnational Activities of Terrorist Groups.

“Among new and emerging technologies, as we have heard, unmanned aerial systems (UAS) are particularly exploited by terrorist groups to facilitate attacks, conduct intelligence and develop propaganda,” he said.

The Insitu ScanEagle drones may have been stolen from Kenyan military stock. Kenya ordered five ScanEagle UAV systems under a $9.8 million FMS announced in September 2015. And in 2012, ordered eight Aerovironment RQ-11 Raven from the United States which are used to detect and monitor the Al-Shabaab movement and support the Kenyan and Somali force’s military operations.

The risk of militarization of drone technology in Africa represents a new asymmetric tool that violent nonstate groups intend to deploy to extend the reach of their coercion, reshaping the African battlefield. Once these drones are in their hands, it’s harder to control how they’re used or neutralised due to limited or in many cases non-existent counter-UAS solutions. Although Kenya does possess a limited C-UAS capability in the form of MCTECH MC-Horizon 360D Reactive anti-drone system to protect its military base scattered around the countryside in Somalia.

For instance, in the Democratic Republic of the Congo, insurgents have recently used unmanned aerial systems to locate targets for attacks. While in Mozambique, Interior Minister Amade Miquidade told a press briefing in May that the insurgents had deployed drones for precision targeting in Cabo Delgado province. This aligns with unverified reports by private security companies in the region that militants used small drones for surveillance.

As UAVs become commercially available all over the world, non-state groups in Africa with bomb-making experience and technical know-how, in general, may develop adaptions similar to what Jihadist groups have done in the Middle East over the last decade.