Sukhoi Su-57E is a 5th generation multi-role aircraft designed for the execution of a wide range of combat tasks. 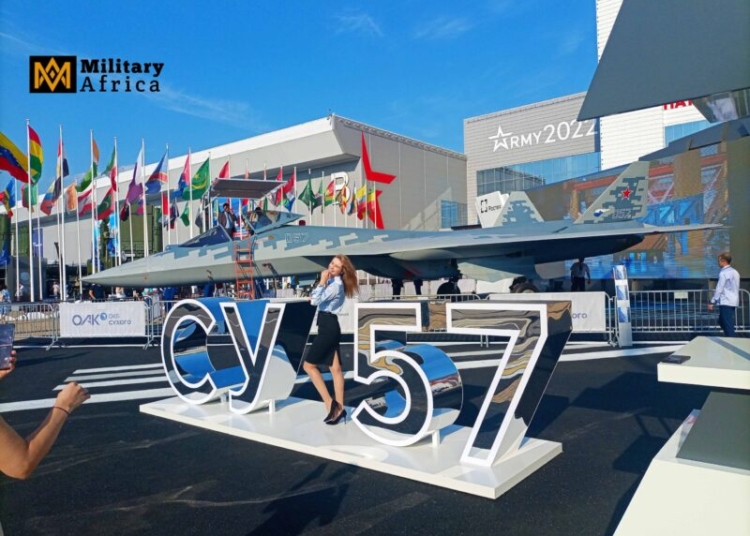 Sukhoi Su-57E ‘Felon’ is a 5th generation multi-role aircraft is designed for the execution of a wide range of combat tasks. the unique features of the ukhoi Su-57E is that it provides stealth combat operations due to its low signature, ontinuius suoer cruise flight capabilities, and can perform a whole range of tactical combat and strategic strike operations.

The Sukhoi Su-57E is a 5th generation multi-role aircraft is capable of carrying out a wide range of combat operations against aerial, ground, and naval targets in both ay and night with the use of guided and unguided munitions. The Felon is equipped with the most modern and advanced avionics suite, armament and self-defense complexes.

Utilizing advanced intelligent support of the fighter and high level of automation ensures effective piloting of the aircraft and execution of the whole range of combat tasks with one pilot.

On June 16, Deputy Prime Minister Yuri Borisov, who oversees the defense industry complex, announced that it was planned to develop a two-seater version of the Su-57 fighter in the export version. “The plans of the Ministry of Defense and the Sukhoi Design Bureau are to manufacture a two-pilot cockpit, which will expand the export demand for this model, it can create additional demand,” Borisov said at the time.

More recently, according to the designer of the Sukhoi Su-57, during the Army 2022 international military-technical forum is running on August 15-21 at the Patriot exhibition center outside Moscow, Russia’s fifth-generation Su-57 multirole fighter may serve as the basis for developing prospective aircraft for new Russian aircraft carriers.

Although the Russian weapons manufacturer declined to name the particular customer, he did say that countries of the Asia-Pacific region, Africa and Europe have shown interest in the fifth-generation Sukhoi Su-57 stealth fighter jet.

Alexander Mikheyev explained that the Sukhoi Su-57 attracted great interest from several regions and that a state contract had been signed for this fighter.

The Su-57E stealth fighter aircraft displayed at the Army 2022 event in Moscow is equipped with a new engine design featuring a jagged edge exhaust nozzle which could be the much-anticipated second-stage engine, expected to power the production versions of the stealth jet. Earlier versions that flew at MAKS 2021 sport rounded engine exhausts similar to that of the AL41FP engine on the Su-35. Yuri Slyusar, Head of United Aircraft Corporation (UAC) said at the Army 2022 event that second-stage engine development is progressing as per schedule without giving any further details.

The X-69 was developed at the A. Ya. Bereznyak State Machine-Building Design Bureau (GosMKB) Raduga (part of KTRV), an enterprise specializing in the creation of high-precision missile weapons.

“The X-69 is equipped with combined navigation and automatic control system. The maximum flight range is up to 290 km, the speed is 700-1000 km / h, and depending on the configuration, the weight of the warhead is 300-310 kg. It can be placed both on external suspensions and in internal compartments of platforms,” the release said.