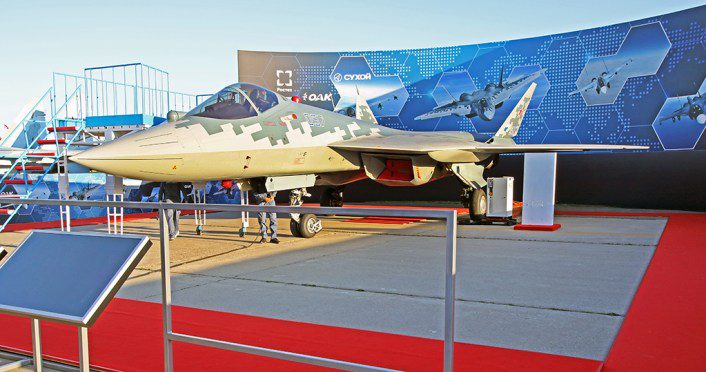 Although the Russian weapons manufacturer declined to name the particular customer, he did say that countries of the Asia-Pacific region, Africa and Europe have shown interest in fifth-generation Sukhoi Su-57 stealth fighter jet.

Alexander Mikheyev explained that the Sukhoi Su-57 attracted great interest from several regions, and that a state contract had been signed for this fighter.

For a long time, Russia has been actively seeking to expand the export customer base for their latest tactical aircraft including the new fifth-gen Su-57, and updated versions of their MiG-29 and Su-27 airframes. In Africa, Egypt, Angola, and Algeria have been potential customers for these Russian aircraft.

Just last year, the Algerian Air Force began taking delivery of its first Russian-made MiG-29M/M2 multirole combat aircrafts in a deal which is expected to increase the size of the country’s combat fleet and replace legacy systems operated by the 193rd fighter squadron.

In 2019, unofficial reports of Algeria has allegedly “signed a contract to purchase 14 of Russia’s newest Sukhoi Su-57 multi-role 5th generation fighter aircraft” started making the round.

The reported Su-57 sale was said to part of a “package” including an additional 14 Sukhoi Su-34 and 14 Sukhoi Su-35s to Algeria. Apparently, the story seems to be entirely false.

Discussions with Algeria for the sale of the SU-57 might have occurred, however, this does not imply a contract has already been signed.

On the other hand, Egypt has taken delivery of all its MiG-29M/M2 fighter jets it ordered from Russia and has started receiving its two dozen Su-35 fighters.