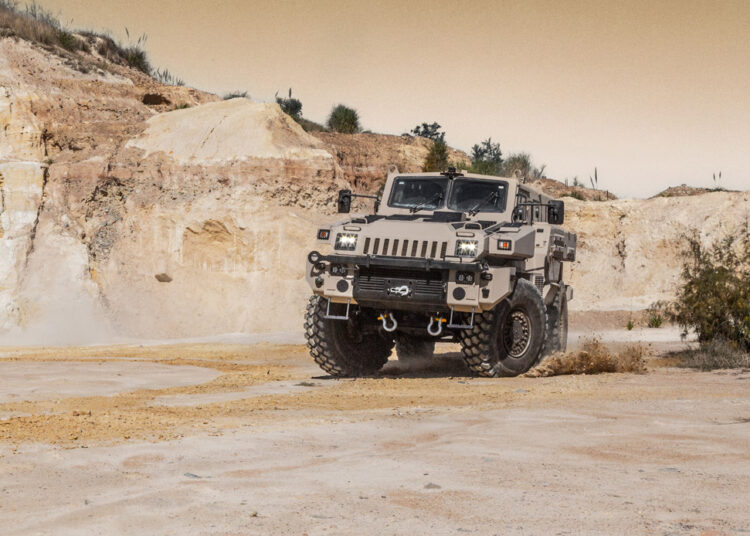 These latest enhancements will enable the Marauder to be manufactured in either Left or Right-Hand Drive configurations, from the same hull and component sets on the same production line.

According to Paramount, the Marauder mark 2 can be converted to either a Left or Right-Hand Drive version in under two hours, should operational needs (such as peacekeeping deployments in foreign countries) require, making the Marauder highly applicable to the asymmetrical challenges of the modern battlefield, wherever in the world that battlefield may reside.

The Marauder features double-skin armour, a burst speed of 110 km/hr, and the ability to operate in conditions from – 20 to +50 Degrees Celsius. Day/night vision devices and extra sensors can also be fitted to provide 24/7 operability. The mine-protected vehicle can carry two crew and up to eight fully equipped soldiers in the rear.

Deon Grobler, CEO of Paramount Land Systems, stated: “The Marauder is one of the world’s most iconic and toughest armoured vehicles, often described as best suited for an apocalyptic environment. We are very proud of its well-deserved reputation and our latest advancements present significant benefits to its performance, crew capability, and the customer.

“Impressive developments in man-machine interfaces often go unnoticed, however, the systems which we have incorporated within the new Marauder ‘Mark 2’ have made great strides in improving ergonomics, comfort, and functionality. The improvements in the Marauder’s operator interfaces will increase usability when operating in rugged conditions, while at the same time reducing driver and crew fatigue, making the platform more comfortable and user-friendly, keeping troops safe and battle ready.”

“In keeping with our 27-year track record of manufacturing innovative solutions to optimizing our customers’ response capabilities to the threats faced in Africa and around the world, we are also pleased to report that we have today increased our own speed of production. We can now manufacture vehicles for stock purposes as opposed to manufacturing based on customer orders, delivering faster solutions for those partners with urgent demands, whether they are operating right or left-hand drive vehicles,” Grobler concluded.

The current Marauder is used by armed forces in Africa, the Middle East, Central Asia, and South East Asia.