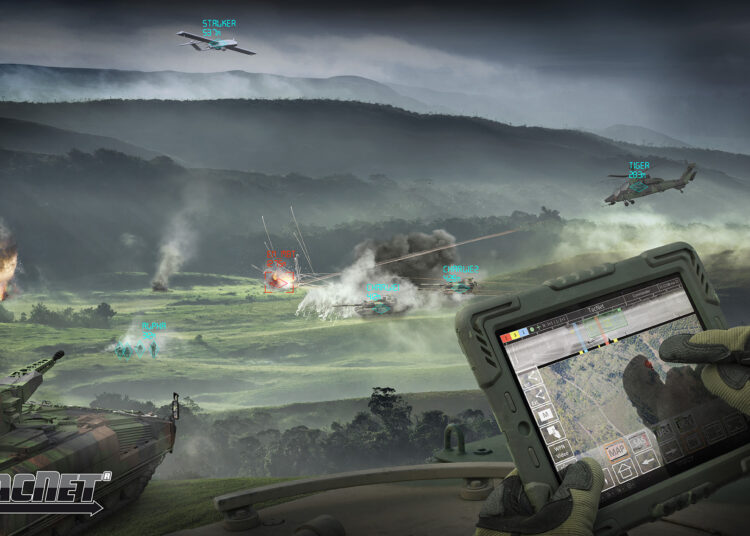 The increasing digitalization of the modern battlefield poses challenges and opportunities for today’s militaries. Connecting systems and actors reliably at multiple command echelons is very important given the decisive impact of information, command and fire superiority.

After joining an elite club of countries in Africa with a future soldier combat system in place with the Gladius Future Soldier System integrated with the Algerian frontline military architecture, the North African country has now integrated a comprehensive battlefield management and information sharing system to its frontline units.

Rheinmetall’s TacNet is a tactical management system designed to meet the needs of rapid and high mobility operations at the tactical level, it functions primarily as a weapons command and engagement system.

The command and control system can also be integrated with Algeria’s Gladius Future Soldier System for real-time information sharing between soldiers, their support vehicles and the gathering of information from drones, helicopters or any other reconnaissance vehicle and cross-referencing them with thermal cameras and radars at the same time.

All in a secure environment, and ensuring tactical units must be able to move, fire and communicate.

TacNet has already been integrated in the Algeria’s Fusch 2, the Boxers armoured vehicles, and with the soldiers and vehicles of the Operational Maneuver Regiments (RMO).

Nimr II armored Vehicule and MaxxPro MRAP with L3Harris C2 Command and Controle System could also be integrated into TMS TacNet thanks to its open architecture.

In addition to this, the communications systems, command and control systems, and data-link systems in the Algerian Land forces are mainly based on Western systems, precisely from Kongsberg Gruppen and L3Harris and Rohde & Schwarz ..

Rheinmetall explained that objective-oriented movement, efficient communication and combat effectiveness define the basis for soldiers at the tactical level.

TacNet – in addition to standard situation maps – offers expanded sensor-effector network functions via standard interfaces such as the Generic Inter-Vehicle Gateway, or GIVG. Forward-looking standards like the NATO Generic Vehicle Architecture (NGVA) have already been included.

Automated integration of sensor, effector and logistics data is densified into a common operational picture, creating a tightly woven information net. TacNet stores and depicts this data, which is used first and foremost for facilitating target engagement. Reaction times from recognition to engagement of threat targets are significantly shorter, thus enhancing the effectiveness of friendly forces.