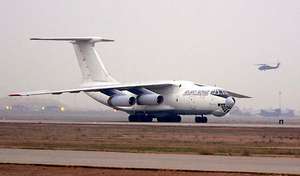 Photograph of Il-76 strategic transport aircraft in an Egyptian airbase emerged late last month, July 2019. Regarding the aircraft transfer, Rosoboronexport, Russian state arms holding company disclosed to the media that Russia had allowed Jordan to transfer the aircraft to Egypt.

“The re-export example shows Russian flexibility in resolving vital issues of the partners in arming the national armed forces and confirms that Ilyushin airlifters are known in the world as reliable and simple to operate aircraft,”

Jordan took delivery of the Il-76MFs in June 2011 after a 2006 contract with Russia and was initially operated by Jordan International Air Cargo, a company owned by the Royal Jordanian Air Force.

The Il-76MF is a stretched version of the Soviet-era Il-76MD transport. Il-76MD transport aircraft with a fuselage that has been lengthened by two additional 3.3-metre sections in front of and behind the wing, increasing the cargo compartment’s volume and aircraft payload.

The Egyptian Air Force which is the only operator of this version plans to increase its fleet to up to eight Il-76MF to enhance its strategic airlift capability. The North African country currently possesses about two dozen C-130H Hercules, several An-74TK-200As, two dozen C-295Ms, several DHC-5D Buffalos and a number of Boeing 707 tanker/transports.