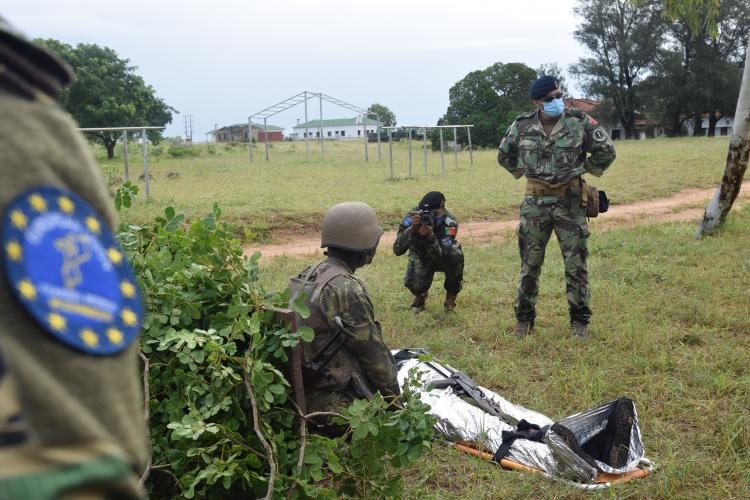 EU military trainers work with Mozambican soldiers while a photographer records the training for future reference and use. The European Union Training Mission (EUTM) in Mozambique is training and building the capacity of the country’s military forces to address security challenges and protect the population in the northern part of the country, where insurgents are active.

The European Union (EU) mission has completed the training of two Mozambican military companies; both drawn from the Army and Navy formations.

Brigadier-General Nuno Lemos Pires of the Portuguese Army, the field commander, announced on Sunday, 20 March that company, one from the Navy, trained in Katembe (near Maputo), and another from the Army, trained in Chimoio (centre of the country), has 130 elements ready to confront terrorism in Cabo Delgado, the northern part of the country.

Also, six aerotactics controllers who directs air support missions from the ground were also trained, they may be integrated with the Army or Navy. A total of 11 companies will be trained.

The European Union Training Mission began in November 2021, and is scheduled to last two years, and is expected to receive 140 military trainers from different countries.

The mission is a responds to the Mozambican government’s request for help in preparing its troops to fight in Cabo Delgado, with the mandate to support a more efficient and effective response by FADM to the crisis in Cabo Delgado. Military personnel undergoing training will be part of a future quick reaction force (QRF).

This cooperation has now been “strengthened” by this EU mission, Lemos Pires said.

The EUTM operates in cycles of four months for each company, and in which 10 Member States are already committed – the largest contingent being Portugal (as well as the mission commander on the ground).

Besides operational and military training, focus has been placed on human rights and international law in conflicts.

On his part, the Portuguese President, Marcelo Rebelo de Sousa, stressed on Sunday at the Chimoio training base the importance of training, considering that victory over terrorism in the northern province of Cabo Delgado will only be full when life is made without limitations.

“Total victory means allowing the populations to carry out their activities normally, without being conditioned by the existence of terrorism,” he said, referring to the region that is undergoing a serious humanitarian crisis, affecting about 860,000 people.

EUTM-Mozambique will contribute to the EU’s integrated approach to Cabo Delgado, alongside peacebuilding, conflict prevention and dialogue support, humanitarian assistance and development co-operation, as well as promotion of the Women, Peace and Security Agenda, the EU said.