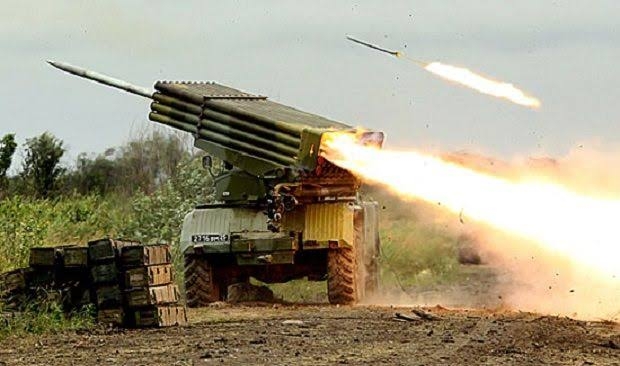 The attack comes ahead of the visit of President Muhammadu Buhari, who is scheduled to arrive the state capital the same day.

Reports indicate that improvised rockets impacted the Ngomari, Bulumkutu, and Ayafe areas located near Maiduguri International Airport (MIU). Casualties and damage to infrastructure have been reported.

The attack were likely carried out with 122mm 9M22U grad rockets captured from national troops operating in the region. Most of ISWAP grad rockets come from Nigerian Army stocks.

ISWAP first captured a large cache of grad rockets with the fall of Baga in 2018, and another pile in Goneri, March 2021, where at least 50 Nigerian soldiers in an ambush near Goneri village in northern Yobe state.

The Soviet-built122mm Grad rockets are usually mounted on a Russian made BM-21 and its heavier Czech variant, the RM-70 multiple launch rocket system (MLRS) trucks, and are also quite inaccurate.

The system which has a 40.5-pound high-explosive warhead relies heavily on saturation attacks with dozens of rockets fired at a particular target.

Boboye Adeolu, a Nigerian defence analyst explained that the attack likely came from Duwari outskirts. “The distance to the farthest reported strike in Ngomari is about 14km which is within the 20km range of the Grad rockets.”

ISWAP has previously targeted settlements with its grad rockets most notably, used Buni Yadi in April 2020, another in March against the Diffa Airport in Niger Republic used by Nigerian and Nigerien aircraft to support Multinational Joint Task Force, MNJTF, operations against Boko Haram.

The first grad attack was on February 23, 2019, when ISWAP targeted Maiduguri hours before voting began for presidential and parliamentary elections.

ISWAP routinely use the 122 mm grad rocket system alongside other captured artillery and mortar system including man-portable mortars and OTO-Melara 105 mm light howitzer.

Fielding questions on Friday at the end of the emergency security council meeting presided over by Buhari at the presidential villa, Usman Baba, inspector-general of police, has expressed concern over the ability of the Islamic State of West Africa Province (ISWAP) to fire rockets in communities in Borno state.

“Yes, they have done it, but to a large extent they have not achieved what they intended to achieve because of the situation the security agencies, particularly the military, put in place.”

Asked if the security agencies have been able to determine the origins of the rockets, Baba said: “Yes, it had been done before and even after. Some of those who must have planned and thrown those rockets have been taken out.”