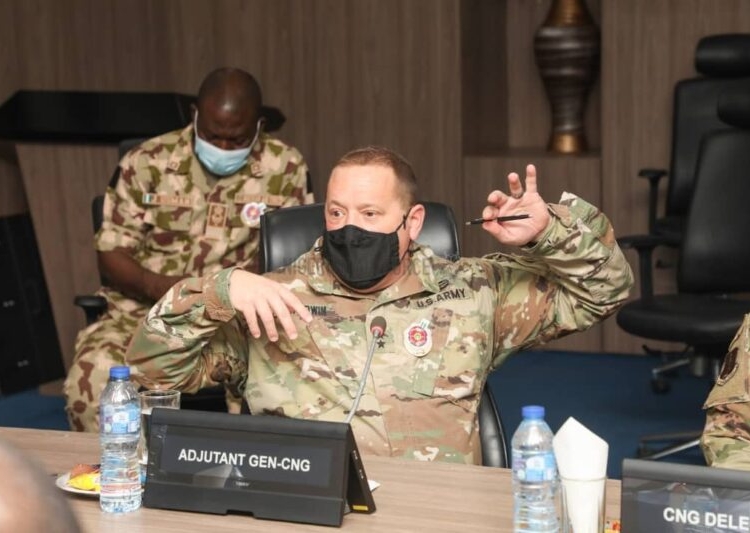 The Adjutant General of the California National Guard (CNG), United States of America (USA), Major General David Baldwin has expressed the readiness of his organization to assist the Nigerian Air Force (NAF) in the development of its Air-Ground Integration School while also building the capacity of its staff and instructors.

General Baldwin, who disclosed this during his courtesy visit to the Chief of the Air Staff (CAS), Air Marshal Oladayo Amao at Headquarters NAF, Abuja, noted that this will go a long way towards improving intreating airborne and ground systems while also enhancing the lethality of NAF operations.

Speaking further, General Baldwin also expressed the desire of his organization to support the NAF in improving its safety plans and strategies while also partnering with the NAF towards improving and enhancing its intelligence gathering skills.

The Adjutant General also pledged the readiness of the US military to support the Nigerian Army to actualise the establishment of its aviation unit. Baldwin made the pledge when he led his team on courtesy visit to Army Headquarters on Tuesday in Abuja.

In the area of cyber warfare, General Baldwin noted the need for close monitoring of the cyberspace as it has, in recent time, become the new battle ground employed by foes. He therefore called for the need to improve the capacity of NAF personnel in cyber warfare sequencing and cyber engagement programmes.

On gender balancing, General Baldwin stated that the CNG encourages female personnel to head critical positions and called on the NAF to tow the same line. He went on to encourage the need for partnership between CNG and NAF Senior Non-Commissioned Officers particularly in capacity development especially in the areas of leadership and command.

While extending an invitation to the CAS to visit the CNG, General Baldwin expressed the willingness of his organization to receive NAF technicians and operators, at no cost, to be embedded within the CNG to share ideas as well as improve capacity.

While welcoming the Adjutant General, the CAS represented by the Chief of Policy and Plans (COPP), Air Vice Marshal Remigus Ekeh, thanked the Adjutant for the consistent support that Nigeria and the NAF have continued to enjoy from the United States Government and its Armed Forces. He stated that one of the outcomes of the support in recent times is the delivery of the 12 A-Super Tucano aircraft as well as capacity building of NAF pilots, engineers, and Air-Ground Integration (AGI) specialists.

AVM Ekeh also noted that the visit was in furtherance of US-Nigeria military-to-military relations and the State of California Partnership Programme with Nigeria which has been in existence since 2006 and will no doubt strengthen NAF existing partnership.

He went on to further highlight areas of intended collaborations with the CNG to include provision of spares and technical support, training of NAF engineers and technicians in maintenance of NAF C-130 Hercules aircraft, as well as provision of firefighting equipment and training aids. Concluding, AVM Ekeh noted, with gratitude that the support from CNG remains critical to NAF operational efforts in the fight against all forms of criminality in Nigeria.

Major General Baldwin was accompanied by Command Chief, Chief Master Sergeant Lynn Williams, Commander’s Action Group, Lt Col Jorge Velez and Air Attaché of the US Embassy Abuja, Lt Col Rob Faith among others. Those present on the NAF side were the Branch Chiefs and selected Directors at NAF Headquarters.