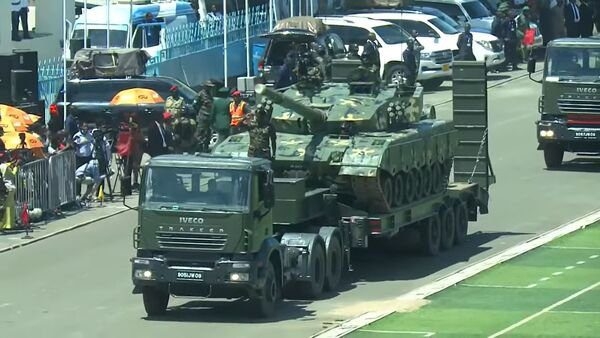 It is not yet certain how many VT-2s we’re acquired.

The TPDF displayed a single Norinco VT2 main battle tank for the first time during a parade in Dar Es Salaam to mark the 60th anniversary of the East African country’s independence on 9 December.

The VT-2 is the export version of the Type 96A tank that is used in large numbers by China’s People’s Liberation Army but was not previously known to be in service with any other militaries.

Although, not as sophisticated as Western, or even Russian designs, however it uses proven technology and is cost-effective. The VT-2 is mainly aimed at developing countries. It can be considered as a cheaper, but inferior alternative to the VT-1 and VT-4 tanks.

Norinco says the VT-2 has a combat weight of 42.3 tonnes, fitted with a 800 hp engine and armed with a 120 mm smooth-bore gun which is fed by an automatic loader.

Both the gun and autoloader were copied from the Soviet T-72. It can fire all standard Chinese and Russian 125 mm tank ammunition. It is assumed that this tank is capable of launching anti-tank guided missiles in the same manner as ordinary projectiles. A total of 40 rounds are carried.

The TPDF usually parade it’s extensively upgraded variant of the Chinese Type 59 tank. The Type 59G is equipped with arrow-shaped spaced add-on armour modules which are mounted on the front of the hull and the turret. Wheels and tracks are now protected by rubber hull skirts.

Hull and turret of this tank is of welded steel construction with a layer of composite armor. Also there are modular add-on explosive reactive armor blocks. The VT2 is fitted with NBC protection and automatic fire suppression systems. It seems that this tank is fitted with countermeasures system, similar to a Russian Shtora-1.

Tanzania relies heavily on China for most of its military needs. In 2014, the Tanzania People’s Defence Force (TPDF) received a range of new hardware from China, including Type 63A amphibious tanks, A100 multiple rocket launchers and Type 07PA self-propelled mortars.

The TPDF has over the years strengthened its defence relations with the Chinese People’s Liberation Army (PLA) with the PLA running various training programmes to improve the operational capabilities of the naval, aerial and land forces.