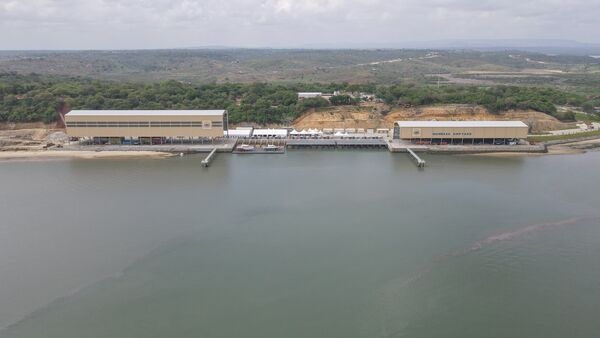 Kenya has inaugurated a shipyard at the Mtongwe Navy base in Mombasa on Friday, making it the first country in sub-Saharan Africa with such a facility.

The Kenya Shipyards Limited (KSL) Mombasa Shipyard comprises of a 4,000-ton slipway for shipbuilding activities including refitting of vessels operated by the Kenya Navy, Government agencies and private operators.

In his speech during the televised ceremony held at Mtongwe Naval Base, south of Mombasa, Kenyatta thanked the Kenya Defence Force and its partner Damen for delivering the shipyard on budget and ahead of schedule. Mombasa Shipyard was developed in partnership with Damen.

Kenyatta said the project was a major milestone not only for Kenya’s navy and security organisations, but also for his ‘blue water economy’ programme to develop the country’s maritime sector as it will also be able to build, refit, and repair civilian vessels.

The new shipyard is operated by Kenya Shipyards Ltd (KSL), which is owned by the Ministry of Defence and has a second yard at Kisumu on Lake Victoria that was opened in May.

On 29 October, KSL released photographs showing Kenyan navy’s large patrol vessel KNS Shupava , which was built in Spain and delivered in 1997, had already been lifted out of the water at Mombasa Shipyard for its mid-life refit. The refit of its sister ship KNS Shujaa was completed by Damen in the Netherlands in 2018, arriving back at it’s home port in July 2018 after a 21-month midlife refit and training voyage.

KSL is a strategic infrastructure asset, enabling the country tap into the multi-billion-dollar global shipbuilding and repair market.

“The key sub-sectors of the blue economy, which include maritime transport and logistics, fisheries, as well as ship-building and repair, represent low hanging fruits that must be exploited,” said President Uhuru Kenyatta at the facility’s commissioning.

The first assignment for the new Mombasa Shipyard will be the refitting of the Kenya Navy tanker KNS Shupavu.

“The direct, indirect and induced impacts of the Mombasa Shipyard will create many jobs, generate diverse investment opportunities and raise revenue for the country,” said President Uhuru.

The Kenya Defence Force (KDF) has been involved in developing the facility for the past two years, and it stands to benefit from access to a local maintenance hub for Kenya’s navy and coast guard. The facility is expected to save the country substantially in terms of the foreign exchange that goes into maintaining its ships in foreign shipyards.