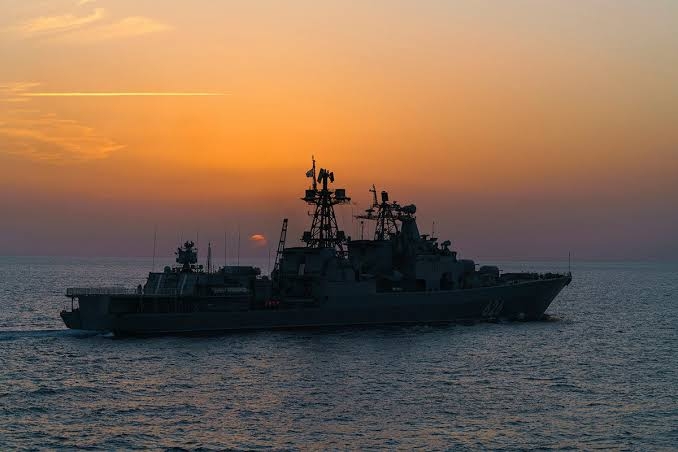 A Russian Navy guided-missile Udaloy-class destroyer carried out a counter-piracy patrol in the Gulf of Guinea, approximately 86 nautical miles southwest of the Agbami Terminal on the Nigerian coast fought off a pirate attack on a container ship.

The incident which occurred on Monday, 25 October was elaborately reported by Russia Today (RT) media, a pro-Russian news website.

Apparently, MSC Lucia, a commercial freighter flying the flag of Panama and bound for Togo, was boarded by heavily armed pirates off the coast of Nigeria.

The crew sheltering in the engine room for protection then sent out a distress call around 1 pm local time on Monday, which was received and acknowledged by the missile destroyer Vice-Admiral Kulakov, carrying out counter-piracy operations in the area.

Details of the incident involving a complement of Russian Marines -a crack amphibious operations unit, riding aboard a KA-27PS naval helicopter to their rescue.

Upon seeing the helicopter, “the pirates left the ship, got into a fast boat and headed towards the coast at full speed,” the Russian Defense Ministry said in a statement. The Kulakov’s marines then landed on the Lucia and conducted a sweep of the ship to confirm it was secure.

The Udaloy-class destroyer Vice-Admiral Kulakov arrived into the Gulf of Guinea on October 11 for a three-week anti-piracy patrol as part of a naval task force which included the tanker Academic Pashin and rescue tug Altai.

The task force is on a long-range deployment since June, when it departed the Northern Fleet home base at Severomorsk earlier in October.

The Kulakov has been on has taken part in the Kronstadt naval parade, conducted anti-submarine warfare training in the Atlantic, and crossed the Mediterranean to Syria and back, before arriving in the Gulf of Guinea. The task force has called on ports in five countries, and traveled more than 20,000 nautical miles.

Vice-Admiral Kulakov alongside the other escort vessels had earlier prevented the seizure of another Panama-flagged vessel in the area, but details about the incident was not published.
The Lucia is owned by the Swiss-Italian outfit Mediterranean Shipping Company (MSC).

For instance, from Jan to 26 May 2021, there were only 8 pirate attacks in the Gulf of Guinea, while only 5 were within Nigeria waters. And most of these attacks in Nigerian waters were aborted arising from the prompt response of the NN ships on patrol through a robust MDA infrastructure.

Part of the TSMS includes Deep Blue Project which is funded by the Ministry of Transport, and has already deployed its integrated maritime security infrastructure.

Vice-Admiral Kulakov anti-piracy actions in the Gulf of Guinea follows a pattern of interventions and assistance by foreign navies either individually and or as part of a coalition.

The most recent, in September this year, the Italian Navy committed two high-end Carlo Bergamini-class frigates (which are variants of the FREMM multipurpose frigate) to engage piracy in the Gulf of Guinea.

Likewise, Denmark deployed one of its Absalon class frigate to the Gulf of Guinea off the West African coastline, as part of its maritime contribution to the international effort against piracy, the frigate arrived at the end of October.