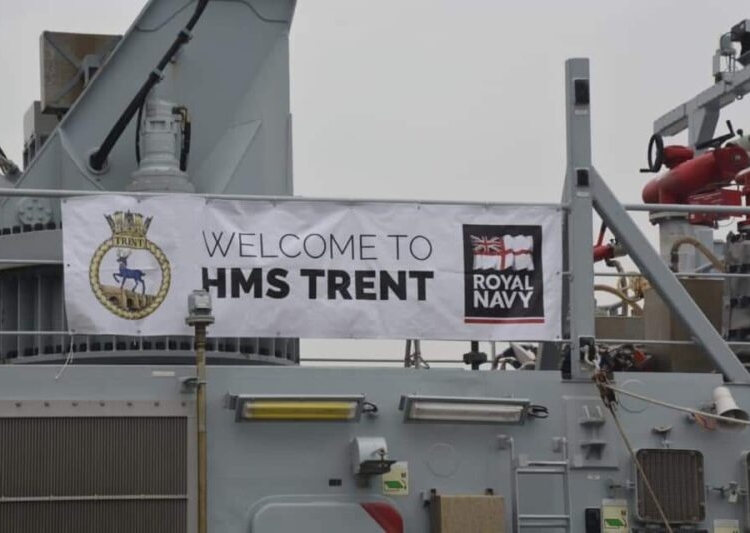 The Royal Navy’s River-class offshore patrol vessel (OPV) HMS Trent and a troop of Royal Marines from 42 Commando are in Lagos, Nigeria October 23 as part of a three-month deployment to the Gulf of Guinea.

HMS Trent recently docked in Nigeria’s coastal city of Lagos, as part of the vessel’s deployment to the Gulf of Guinea to strengthen cooperation and maritime security.

The UK’s Deputy High Commissioner in Lagos, Ben Llewellyn-Jones, welcomed the ship at a reception today, saying, “Nigeria’s security and prosperity are important to the UK.”

The Royal Navy is present because the United Kingdom is a dedicated partner to Nigeria and the larger West African region. We will continue to collaborate with Nigerian authorities to combat unlawful behavior, strengthen marine security, combat piracy, and combat the Illegal Wildlife Trade. To do so, we will draw on our experience in cross- and multi-agency collaboration to promote peace, growth, and prosperity in the United Kingdom.”

HMS Trent is the first Royal Navy vessel to operate in the region for three years. The vessel is a Batch 2 River-class offshore patrol vessel, named after the River Trent.

Additionally, members of the ship’s company will participate in a charity beach clean-up as well as the Maritime Security Conference at the Nigerian Institute of International Affairs (NIIA).

“As Trent made her way to the Gulf of Guinea my crew honed their skills in Maritime Security Operations and commenced Counter Illicit Activity Patrols. Piracy, Narcotics, and broader criminal activities in this region demand that my Royal Navy Sailors and Royal Marine Commando Force are always ready to respond, from Boarding Operations through to lifesaving assistance at sea.”

Boarding exercises according to a statement signed by the Press and Public Affairs Officer/Foreign Commonwealth and Development Office, Ndidiamaka Eze, “ are vital integration training for the newly embarked Royal Marines, who joined at the start of HMS Trent’s patrol of the Gulf of Guinea.’’

The three-month deployment will see the ship travel around the Gulf of Guinea, visiting countries including Ghana, Senegal, and Gambia. Alongside their commitments to conduct joint exercises and train with partners in the region HMS Trent will also conduct maritime security patrols and promote the UK’s position as co-president at the G7++ Friends of Gulf of Guinea conference in November.