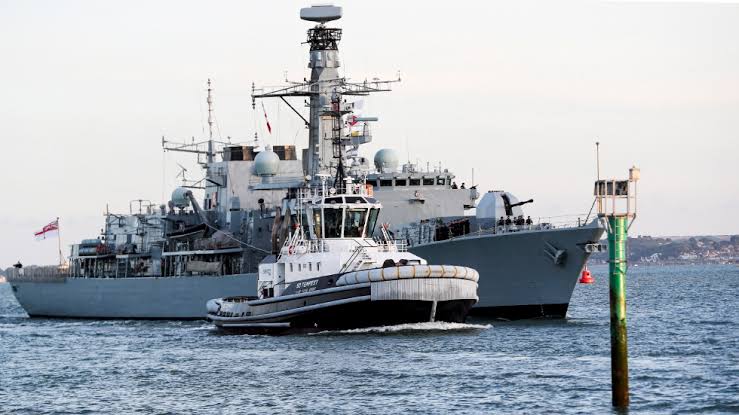 HMS Kent, a Royal Navy Type 23 Frigate, docked in Mombasa City on Wednesday, November 3, and was in the port until Saturday, November 6.

UK’s Minister for the Armed Forces, James Heappey, visited the ship and the Kenya Navy Training College (KNTC) where he met Lt Colonel Vincent Rono, Deputy Commandant of the KNTC, reaffirming Britain’s commitment to supporting Kenya’s security and the close partnership of the two nations.

Heappey noted that the partnership proved that UK was committed to partnering with Kenya in boosting security and Military activities.

“The training partnership between the Royal Navy and the Kenya Navy Training College is reflective of the UK’s commitment to the security and prosperity of Kenya and its people.

“Kenya is the UK’s closest ally in East Africa and, working together, we are committed to keeping East Africa’s seas safe and allowing trade to pass freely through the region,” he stated.

During the ship’s visit, Royal Navy sailors will train with Kenyan counterparts in firefighting and damage control scenarios.

Their specialist knowledge and expertise was on show during the training which culminated in a live boarding exercise with a Kenyan coast guard vessel, the Royal Navy said.

Commander Matt Sykes, Commanding Officer of HMS Kent, said: “Kenya’s inclusion in the Carrier Strike Group deployment is very much a demonstration of the deep and longstanding UK-Kenya relationship.

“We are hugely grateful to the government of Kenya and the Kenyan Armed Forces for their support during HMS Kent’s visit.”

The HMS Kent is one of the newest Type 23 Frigate within the Royal Navy arsenal.

It was built by BAE Systems on the Clyde and was launched on May 27, 1998, by Princess Alexandra of Kent.

The Royal Navy is sustaining it’s collaborative effort with African navies, and the UK’s commitment to the maritime security of it’s African allies.

This visit to Kenya follows another recent visit to Nigeria where a Royal Navy’s River-class offshore patrol vessel (OPV) HMS Trent and a troop of Royal Marines from 42 Commando arrived Lagos, Nigeria on October 23 as part of a three-month deployment to the Gulf of Guinea.