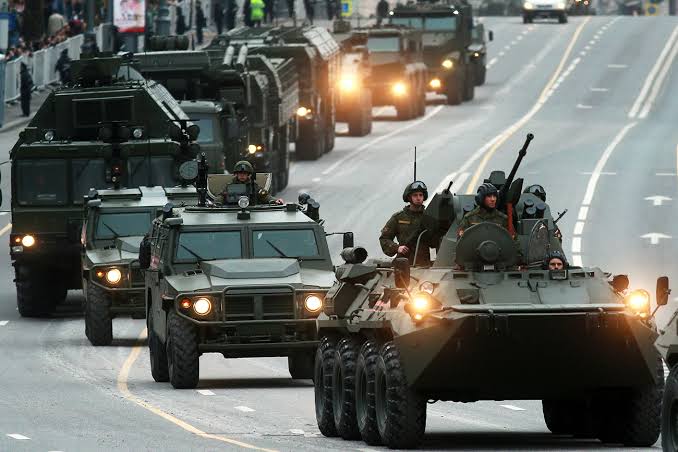 The Nigerian Army intends to leverage its longstanding and productive relationship with Russia to acquire more military hardware to deal with the various security threats plaguing the country.

The Chief of Army Staff, Lt. Gen. Faruk Yahaya, has solicited the help of the Russian government to support Nigeria with “sophisticated equipment” to improve security in the country.

Yahaya made this known on Thursday October 14, when the Russian Ambassador to Nigeria, Alexey Shebarshin, paid him a visit at the Army Headquarters.

In a statement confirming the visit, the Director of Army Public Relations Brigadier General Onyema Nwachukwu, said the COAS also spoke on the need to support collaboration between both countries.

The statement read, “The Chief of Army Staff, Lt. Gen. Faruk Yahaya, has stated that the Nigerian Army will further explore the cordial bilateral relations between the NA and Russian government for acquisition of military equipment to enhance its operations across the country,”

“Reminiscing the long existing relationship between the NA and Russia, the COAS expressed the need to rekindle the relationship for their mutual benefit.

“He also solicited the support of the Russian government in the provision of sophisticated equipment to shore up NA’s combat efficiency in the fight against terrorism, insurgency and other sundry crimes orchestrating insecurity in some parts of the country.

“He assured the Ambassador of NA’s determination in sustaining the cooperation.
According to the statement, the ambassador lauded the Army’s fight against insecurity, both local and on the continent, while indicating interest in supporting Nigeria’s security efforts.

“The Russian Ambassador to Nigeria lauded the contributions of the NA in the stability of the continent and described Nigeria as critical on the African continent in terms of military capability, trade and investment.

Russia and Nigeria already enjoys a robust bilateral relations especially in military procurement between both countries. Most recently, in August, Nigeria signed a Military-Technical Cooperation Agreement with the Russian Federation at the Army 2021 defense exhibition.

The Honourable Minister of Defence, Major General Bashir Salihi MAGASHI (Rtd), on an official visit to Russia, signed on behalf of the Federal Republic of Nigeria, while the Director of the Federal Service for Military-Technical Cooperation, Dmitry Shugaev, signed for the Russian Federation.

The Technical Cooperation Agreement was first drafted and planned in 2019 when President Muhammadu Buhari entered talks with Vladimir Putin in October 2019 at the sidelines of a Russia-Africa summit in Sochi.

Russia through the ROSOBORONEXPORT (Russia’s sole state agency for export) already offers to African clients it’s full range of defense-related and dual-use products, services and technologies. It is part of Rostec State Corporation.

In October 2019 at the Russia-Africa summit that took place in Sochi, Russia, it was announced that Africa’s orders for Russian systems amount to up to 30-40% of Russia’s defence exports, reaching more than $14 billion, while Sub-Saharan states bought defence equipment worth USD 2 billion at that time.

An additional $1 billion worth of Russian arms were subsequently sold in six month after the Russia-Africa Summit, according to the Director of Russia’s Federal Service for Military and Technical Cooperation (FSMTC) Dmitry Shugayev in the interview to Interfax news agency.

The number has likely increased exponentially since then oweing to recent increased in military acquisition by African forces.

Presently, Russia has rolled out a new family of the Typhoon-K MRAP optimized for African Customers, which are available in the 6×6 (KAMAZ-63969) and 4×4 (KAMAZ-53949) wheel configurations, an informed military source disclosed to Military Africa.

“Rosoboronexport is successfully continuing to foster military-technical cooperation with Sub-Saharan African countries, which received a strong impetus during the Russia-Africa Forum in 2019. In 2020 and early 2021 alone, we signed contract documents worth over $1.7 billion in this region and brought the number of countries in Central, Western and Southern Africa in our order portfolio to 17,” said Alexander Mikheev, Director General of Rosoboronexport.

The assault rifles being offered includes Kalashnikov AK-100 and AK-200 series, AK-12 and AK-15 assault rifles that are most in demand in the region and the AK-19, AK-308 rifles, absolute novelties in Africa.

African customers were also provided with information about Russian anti-tank guided missile systems, including the Kornet-E and Kornet-EM systems, 120 and 82 mm mortars.

Rosoboronexport had announced that it was ready to hold detailed consultations and negotiations on the supply of this equipment.

Military Africa learnt that the Tigr family of armored wheeled vehicles were in most in in demand in African countries. They were first unveiled at the Army Expo 2020 took place in Kubinka near Moscow in the last days of August.

In an interview with with Mr. Alexander Krasovitsky the Director General of Russia’s Military-Industrial Company (MIC) makers of a wide range of world-class armoured vehicles, in addition to upgrading the existing TIGR family special armored vehicles, two prototypes of the brand new family of Strela light armored vehicles were developed and assembled. One of them is built in the configuration of an amphibious protected vehicle.

In a number of countries, armored units equipped predominantly with Russian vehicles became the backbone of the national armed forces.

Rosoboronexport has supplied 3000+ tanks and vehicles based on them abroad, including artillery, engineer and other weapon systems and military equipment, over 20 years of its activity in the international arms market.