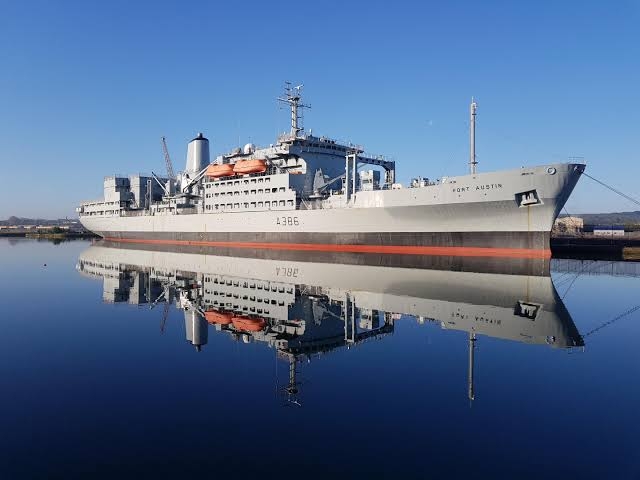 Egypt has purchased two Fort Rosalie-class replenishment tankers from the UK, according to a press release of the UK Ministry of Defence.

The 24,000-tonne Royal Fleet Auxiliary (RFA) replenishment ships Fort Austin and Fort Rosalie are to be sold to Egypt. Both support vessels were decommissioned earlier this year after more than 40 years of service, and were destined to be scrapped.

The 1970s-vintage vessels are reported to be in good overall condition, and Cairo is negotiating with UK shipyard Cammell Laird for both ships to receive major refits, probably including the replacement of their main engines.

The sale marks the first time in more than 30 years that the United Kingdom has sold naval vessels to Egypt.

Both vessels were laid up mainly because their replenishment-at-sea rigs are not compatible with the Royal Navy’s Queen Elizabeth-class aircraft carriers.

“Their new lease of life could also support UK jobs, with negotiations underway for refurbishment work on the vessels before they are exported,” the UK Defence Equipment Sales Authority (DESA) said.

For Egypt, the Fort Rosalie class vessels will enable the Navy to carry out long range operations, with their 19,000 km range, and will be able to support its largest vessels, including the two Mistral class landing helicopter docks (LHDs).

“Fort Austin and Fort Rosalie performed a critical part in sustaining our naval fleet for decades, and I appreciate everybody involved in their essential job,” said Jeremy Quin, Minister of Defence Procurement.

“While we honor these ships’ previous service, we can also look forward to the exciting future of receiving our new Fleet Solid Support ships.”

With Egypt’s growing and strong economy, as well as increasing security in the Mediterranean Sea, the North African nation has expanded its capabilities in recent years, as it seeks to protect its offshore interests and to extend its regional influence.

Developing defense exports and investments, backed by the £24 billion investment announced last year, is a critical component of growing Global Britain and asserting UK defense in the face of new threats. The latest Integrated Review and Defence Command Paper support these goals by establishing a strategic foundation for such commercial activities.

“DESA is extraordinarily thrilled to be working with the Egyptian Navy on the regeneration of two former Royal Fleet Auxiliary ships,” said Clive Walker, Head of DESA, which is part of Defence Equipment and Support (DE&S).

“This is a physical demonstration of the two fleets’ developing relationship, as well as the importance of the UK-Egypt strategic alliance.”

Fort Austin and Fort Rosalie have helped to ensure Navy personnel all over the world have the food, ammunition and explosives they need to carry out vital operations.

The sister ships have two flight decks, which means as well as traditional replenishment at sea they are also able to use helicopters to offload supplies.

The 185 metre long ships are designed to deliver bulk ammunition, dry stores, and food to maritime task groups. They displace 23,400 tonnes, and have a capacity for up to 3,500 tons of ammunition, stores, and victuals across four holds. Six replenishment at sea stations are available for the transfer of cargo while under way.

In the RN service, the ships will be replaced by Fleet Solid Support ships, which will form part of the UK’s Carrier Strike Group.

The class can carry up to 4 × Westland Sea King-sized helicopters, and is fitted with a Kelvin Hughes Ltd SharpEye navigation radar.

“Fort Austin and Fort Rosalie have both served the Royal Fleet Auxiliary, Royal Navy and many of our allies with distinction, across the globe both at peacetime and during conflict. Their sale to the Egyptian Navy – the first sale of UK military vessels to this partner in more than 30 years – represents both an investment in a UK partner nation and an opportunity to continue supporting our industry partners who will prepare these vessels to hand over, which is central to the successful National Shipbuilding Strategy.”