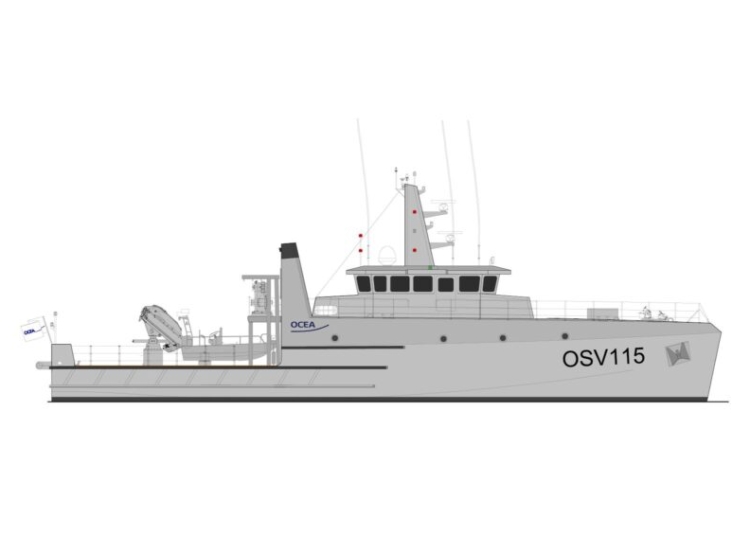 French shipyards OCEA has announced that it has won an international tender to deliver a new 35-meter hydrographic research vessel to the Nigerian Navy, confirming the sale as first reported by Military Africa earlier in June.

OCEA stated on Tuesday, 12 October that “after the delivery in 8 years of 18 ships to the Nigerian Navy, including the NNS LANA, a 60-meter hydrographic research vessel type OSV 190 SC-WB, two 35-meter patrol boats type FPB 110 MKII and two interceptors of 17 m type C-FALCON in 2020, OCEA won an international tender for the supply of a 35-meter hydrographic research vessel type OCEA OSV 115 SC-WB.”

OCEA’s OSV 115 SC-WB type vessel is a hydrographic and oceanographic research vessel from the auxiliary vessels range. Intervening in support of the OSV 190 NNS LANA, it will allow the Nigerian Navy to complete the knowledge of its maritime territory.

To carry out its missions, the vessel will be equipped with high-performance technical and scientific equipment like; a multibeam echo sounder, a single beam echo sounder, a means of water sampling, storage and analysis, a wet laboratory, and a 5.6 m hydrographic boat fully equipped for surveys in small and very shallow waters.

NNS Lana is a purpose-built Offshore Survey Vessel, the new vessel was conceived as a replacement to the previous NNS Lana, a survey ship that was decommissioned about ten years ago.

NNS Lana was handed over in a ceremony held in Saint Nazaire, France on April 16th, with several dignitaries in attendance.

Lana arrived in Lagos on 17 May from her maiden homeward journey from France.

For a long time, French OCEA shipbuilding have been a major supplier of boats to the Nigerian Navy. The company has delivered several patrol and research vessels to Nigeria, and apart from NNS Lana, Ocea delivered an FPB110 class boat “NNS SOKOTO” (P193) and the C-Falcon 2 (P272) interceptor boat to Nigeria last November.

The C-Falcon 2 (P272) interceptor boat is the first of four, the other three vessels will be delivered shortly says Ocea.