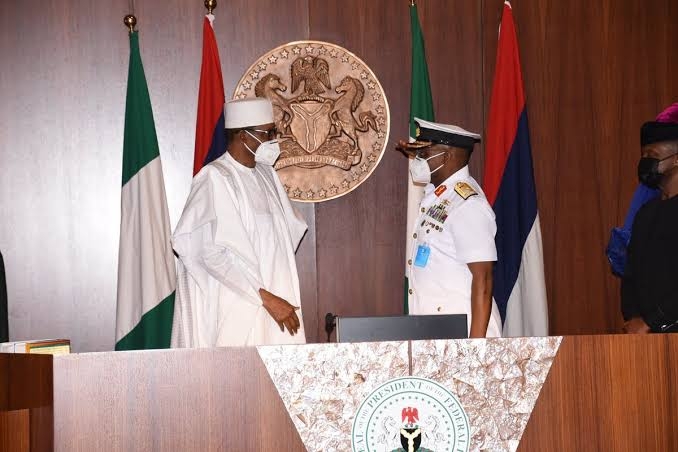 To keep the nation’s waters safe from all types of maritime threats, the Nigerian Navy (NN) has conceptualized a multi-layered Total Spectrum Maritime Strategy (TSMS).

The strategy emphasis effective maritime surveillance, response capabilities, and enforcement of the nation’s maritime laws.
This strategy was disclosed by the Chief of Naval Staff Vice Admiral AZ Gambo during the graduation ceremony of the fifth iteration of the naval warfare course on 5 August.

“To achieve her Mission objectives, the NN has over the past 5 years made concerted efforts to implement the Strategic Plan along identified lines; fleet renewal, infrastructure, and logistics as well as HRM and capacity building.”

The Nigerian Navy strategic goal in the short, medium, and long term was presented in 2009, and its requirement is outlined thus;

Accordingly, the NN prioritized her activities, projects, budgets, and plans in line with these pillars: fleet renewal, logistics, and infrastructure, operational capacity building.

Within the short-to-medium term include 100m Landing Ship Tank from DAMEN Shipyard-Netherlands, 45m Fast Patrol Craft from Poly Technology Incorporated-China while the contract for 35m Hydrographic Survey Ship has been signed with OCEA Shipbuilding.

The NN is also in the process of procuring UAVs to enhance our response capability.
In the area of local shipbuilding, the construction of SDB III as well as water and fuel barges and houseboats are progressing steadily.

The fleet renewal has paid off, with increased Nigerian Navy footprints across the maritime domain leading to the arrest of hundreds of suspected criminals for various maritime offenses in the last five years.

For instance, from Jan to 26 May 2021, there were only 8 pirate attacks in the Gulf of Guinea, while only 5 were within Nigeria waters. And most of these attacks in Nigerian waters were aborted arising from the prompt response of the NN ships on patrol through a robust MDA infrastructure.

Despite these significant gains, Vice Admiral Z Gambo noted that the NN still have a shortfall of about 8 Offshore Patrol Vessels (OPVs) and about 69 Fast Attack Craft.

Also, NNS CALABAR, one of NN’s new OCEA patrol boats sank along Badagry Creek in March 2019 while 5 other patrol vessels sank between April 2018 and Jan 2020 around the Escravos channel, due to a collision with submerged wrecks.