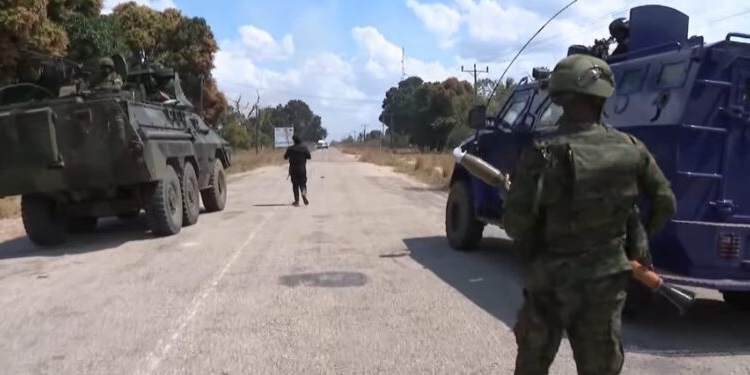 The Rwandan contingent now forward-deployed to the restive Cabo Delgado region in Mozambique has been spotted using the Isotrex Phantom 2 armored vehicle.

The UAE-built Isotrex Phantom 2 vehicle is a new version of the 4×4 B6 Armoured Personnel Carriers (APC), featuring a 5 door configuration, with 360° gun turret and with two or three escape hatches.

Rwandan soldiers in the forward sector of the battlefield eliminated 14 insurgents in Mozambique in fighting last week, however, a Rwandan soldier had sustained a minor injury.

According to media reports by Rwandan military spokesman Ronald Rwivanga, “the fighting took place between 24 and 28 July in the regions of Mbau and Awase.”

If not for the images obtained recently through social media, Rwanda is not a known user of the Isotrex Phantom II armored vehicle.

The blue coloured Phantom II APC was seen spearheading an assault against the insurgents in Awase.

“We mounted an ambush between Mbau and Awase where we killed two insurgents. And the rest of the fighting took place in Awase. We so far killed 14 insurgents in total,” Rwivanga said.

For it’s part, Rwanda has deployed a 1,000-strong force to Mozambique to help it combat an escalating Islamic State-linked insurgency.

The other user of the Emirati-built Isotrex Phantom II armored vehicle is Nigeria which acquired several of the type and also the Legion armored vehicle early this year.

Specifically, an April report published by the Nigerian Ministry of Defence (MOD) detailing information of equipment ordered for the Nigerian military revealed that the Nigerian Army had initially ordered 10 second generation T-90 main battle tanks from Russia, but canceled the order for a fleet of Isotrex armored vehicles and other equipment.