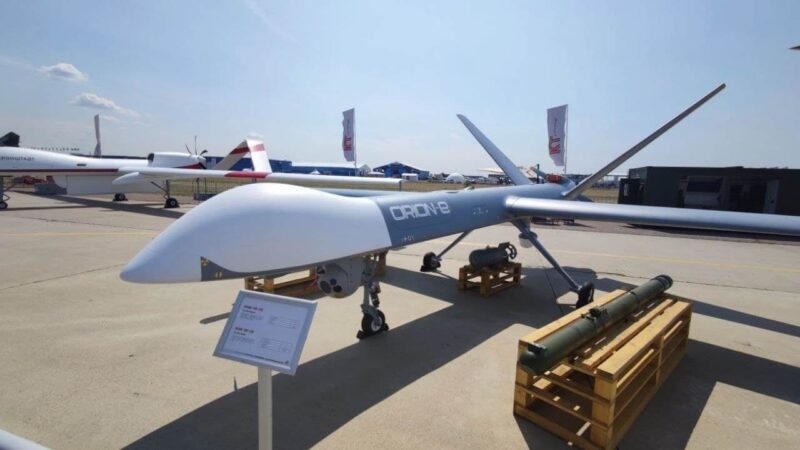 The Kronshtadt company has unveiled at the MAKS-2021 airshow the Orion-E medium-altitude long endurance (MALE) reconnaissance/strike unmanned aerial vehicle with satellite data link. As the main Russian UAV developer reports, the talks on the Orion-E’s delivery have been conducted with more than a number of potential customers, including those from Africa, from the Middle East and from South-East Asia.

Russia has recently started the market promotion of the Orion-E drone in the reconnaissance/strike configuration, thus entering the UCAV league dominated before by a very limited number of countries. The Orion-E is intended for performing missions in a wide range of climate zones.

According to the official presentation of the Orion-E UCAV, its major advantages include the capability to conduct reconnaissance round-the-clock in optical, IR and radio bands, high-level automation of data processing and transmission, self-sustainability, versatile flight modes (autonomous or under operator’s radio control). From one ground control point up to 4 UAVs can be simultaneously controlled.

The Orion-E is equipped with replaceable payloads based on modular principle. There are three hard points for aerial weapons. The drone is also able to use the radio-electronic warfare equipment.

“At the moment the Kalashnikov specialists are considering the possibility of adapting the Vikhr for use on the latest Mi-28NE, Mi-35P helicopters, as well as on the Orion-E unmanned aerial vehicles”, said the Kalashnikov.

According to the company, the Vikhr is capable of hitting targets at a distance of up to 10 kilometers, its speed is more than 600 meters per second. Thickness of homogeneous armor behind dynamic protection penetrable by the tandem shaped charge warhead – 750 mm.
Earlier, in May, Kalashnikov Group announced, that Russia successful flight trials of the Vikhr missiles had been conducted with a series of missile launches performed by a Ka-52 Alligator reconnaissance/attack helicopter.

Earlier, in May, Kalashnikov Group announced, that Russia successful flight trials of the Vikhr missiles had been conducted with a series of missile launches performed by a Ka-52 Alligator reconnaissance/attack helicopter.