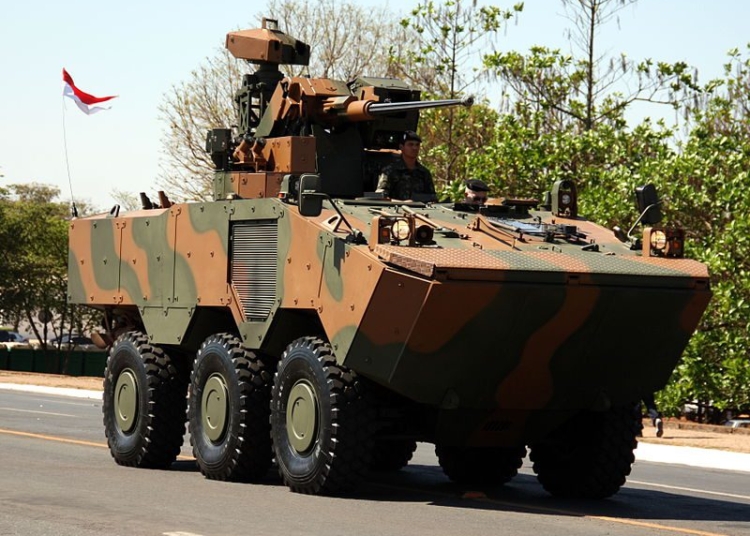 The Israeli company Elbit Systems announced that last week that it has signed a contract for an initial supply of 11 Iveco Guaraní 6×6 armored personnel carriers (VBTPs) with the Government of the Republic of Ghana.

The VBTP is a family of 19,6 tonnes 6×6 armoured, amphibious vehicles, developed jointly by Iveco and the Brazilian Army (DCT – Department of Science and Technology).

The Guaraní 6 × 6 armored personnel carriers will be manufactured at the Iveco Defense Vehicles facility in Sete Lagoas (MG) and will be equipped with remotely controlled weapons systems (SARC), similar to the Remax, which will be supplied by Ares Aeroespacial e Defesa.

The vehicle is equipped with a Mk44 Bushmaster II cannon and a 7.62mm machine gun.

Its turret is fitted with the sights of a weapon and is stabilized in two axes, allowing the vehicle to fire on the move with a very high probability of hit within the first shot.

Military Africa understands that this government-to-government deal will be funded by an agreement between the Discount Bank of Israel and the Ghanaian government. The business is insured by Israel Foreign Trade Risk Insurance Corporation.

Ghanaian MPs stated in recent parliamentary sessions that the purpose of the purchase of these vehicles is to help the national army deal with possible terrorism, human smuggling and other security threats along the northern border with Burkina Faso.

The acquisition will also allow the Ghanaian army to complete the creation of two new armored regiments to be based in Sunyani and Tamale.

The African country’s parliament has approved a government loan of $ 86.1 million to finance the acquisition of the 19 armored vehicles. Ghana will also be acquiring 9 Elbit Sentinel 8×8 IFVs equipped with Elbit Systems remotely operated 30mm cannon.

In the meantime, the Ghanaian Ministry of Defence (MOD) signed a Letter of Intent (LOI) with Indonesian defence company PT Pindad in November 2019 for the procurement of a wide range of military products.

The Cobra IIs were armed with .50 FN M2 heavy machine guns, while the Cobras were fitted with 7.62 mm FN MAGs in a protected turret