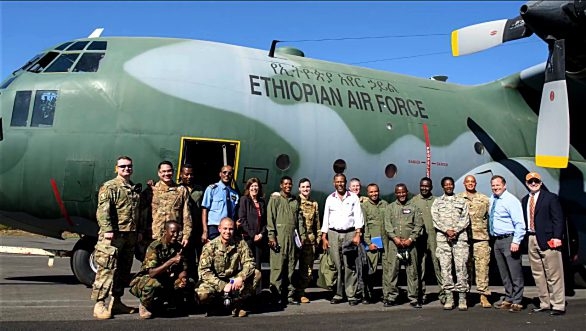 The ongoing conflict in Ethiopia’s northern region has a new turn as forces of the Tigray People’s Liberation Front (TPLF) – a rebel group claims to have shot down a Lockheed C-130E Hercules tactical transport aircraft of the Ethiopian Air Force in June 23.

The downed C-130E Hercules aircraft with serial 1564 (c/n 382-3822), was carrying troops and ammunition to the frontlines when it succumbed to enemy anti-air action, leaving only one of the type in service.

Ethiopia’s C-130s are operated by the 15 Squadron at Debre Zeit Air Base, a part of Harar Meda Airport in Bishoftu. There have been no confirmed survivor in the crash.

The Ethiopian Air Force operates two C-130Es donated by the United States in July 2014 and 2018 to assist in airlift and transportation duties for the Ethiopian forces currently battling the deadly Somalian terrorist group al-Shabbab.

Operated as serial 62-1858, the US-donated C-130E had clocked 22,739 flight hours before being transferred to the Ethiopian Air Force.

The C-130E is an extended-range development of the C-130B, with two underwing fuel tanks and increased range and endurance capabilities.

Ethiopia launched a military offensive against the TPLF in the Tigray region last November.