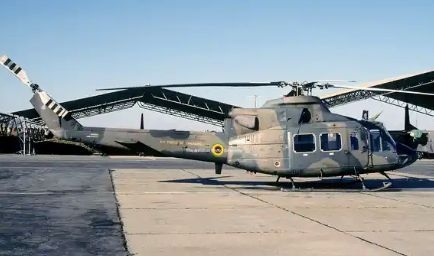 An Air Force of Zimbabwe Agusta Bell 412 (AB 412) helicopter crashed on Friday, 23 April killing three crew members and a child on the ground as it came down on a house.

The Agusta Bell 412 (AB 412) helicopter from Number 8 Sqn crashed in Hukuru area near Harare. Four crew members and one civilian on the ground died.

The helicopter was on a training mission, with two pilots and a technician when it disappeared on the radar.

The Bell 412 helicopter crashed on a house in Arcturus, a farming area some 30 km east of the capital Harare.

“We are deeply saddened by the loss of lives after the unfortunate accident,” Air Marshal Elson Moyo said.

A video released on Social media charred parts of the helicopter and security forces conducting an investigation.

It is still uncertain the cause of the crash.

The No.8 squadron has been flying Bell 412SP helicopters since the Second Congo War in 1998 which were later armed with rocket launchers.

Similarly, a SIAI-Marchetti SF260 trainer aircraft belonging to the Air Force of Zimbabwe (AFZ) crashed in a compound in Somabhula, about 24 km south-west of Gweru, near the central city of Gweru, killing both pilots last year December.