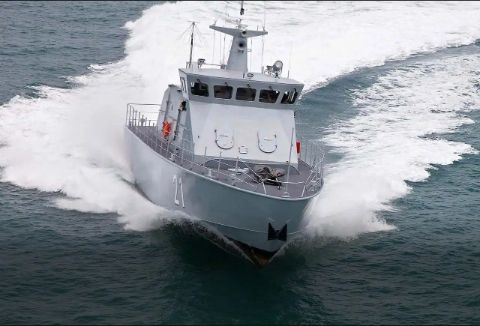 The new Lurssen boats are part of an order for ten vessels, three boats arrived Alexandria port on Sunday 14 February aboard a heavy-lift Rolldock ship.

The Egyptian Navy will be supplied with nine Lurssen patrol boats and a single coastal defence boat from Germany under a 130 million euro deal signed last year November.

The boats were initially intended for Saudi Arabia but the deal was cancelled following an arms embargo placed by Germany in November 2018, due to Saudi’s involvement in Yemen and the Jamal Khashoggi affair.

The Arabian nation Saudi had ordered 35 vessels from Lurssen in 2013, with Lurssen had delivering 15 and completing another seven. The first TNC 35 was delivered to Saudi Arabia’s Border Guards in November 2016.

For the past few years, Berlin and Cairo has signed several deals for the supply of naval vessels. A deal to deliver four Meko A200 corvettes from Germany’s ThyssenKrupp Marine Systems (TKMS), one of which will be built in Egypt is still ongoing.

TKMS also built four Type 209/1400mod submarines for the Egyptian Navy, three have been delivered and the fourth has been launched but is yet to arrive.