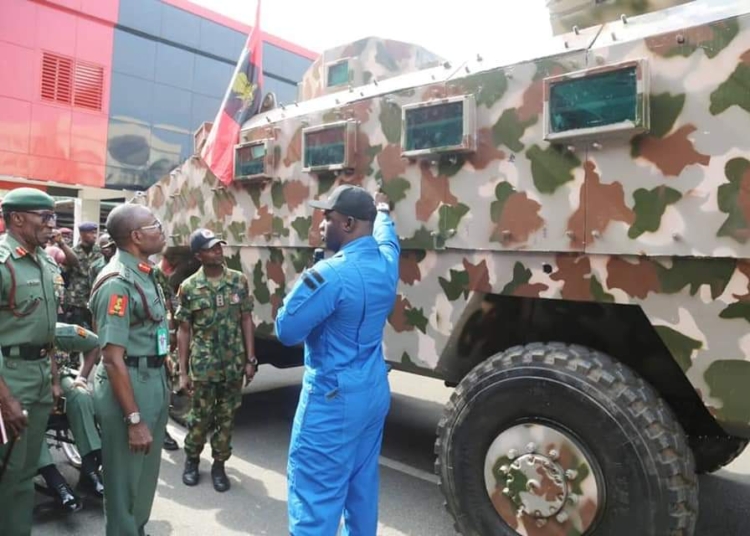 The Nigerian army has awarded a contract to the Defence Industries Cooperation of Nigeria (DICON) for 52 Ezugwu Mine Resistance and Ambush Protected (MRAP) which would be supplied between June and July this year. Director-General of The Defence Industries Cooperation of Nigeria (DICON), Major General Victor Ezugwu on Wednesday, 6 January, made this known during a three-day retreat organized for management staff of DICON in Kaduna.

In a speech during the event, Major General Victor Ezugwu pledged the readiness of the industry to redouble its efforts in the production of military equipment and arms to further strengthen the ongoing war against terrorism and other forms of insecurity the country is faced with.

He stated that “DICON would do more in the manufacturing of ordnance materiel for the Nigerian Armed Forces and other security agencies – leveraging on in-source materials.” Maj-Gen Ezugwu believes in research and production of more sophisticated hardware for the Nigerian military to be able to deal decisively with emerging security threats.

” Our research and development has been up and doing and this year, we are hoping to test the equipment and by the time they pass the field trial test, we will commence mass production.

This is the priority we have for this year because we really need to shape the battle environment for the armed forces to be able to bring insurgency to conclusion this year,” Ezugwu said.

“We are having feedbacks on the vehicle we rolled out for field operations, so far, we have worked on the mine resistance capacity of the ‘Ezugwu MRAP’ and it has been able to play its role very well in resisting the impact of mines on occupants of the vehicle.

“We are hoping that as we produce them, we are going to be improving on them based on the feedback we get from the field, however, we are trying to minimize the importation of the vehicles,” he said.

“The awareness, operational efficiency of our troops has been enhanced with the introduction of the vehicles and we are hoping that it will really help our operational base.” Ezugwu said.

The Ezugwu Mine Resistance and Ambush Protected (MRAP) vehicle was first unveiled in September 2019, built by DICON in collaboration with Command Engineering Depot (CED). Since its unveiling, the Ezugwu MRAP has undergone several upgrades and changes. The latest iteration of the vehicle was unveiled at the EXPO 2020 organized by the Federal Ministry of science and technology in Abuja.

The new version of the Ezugwu MRAP appears taller than the previous version, however, it still retains it double turret arrangement. A 360 degree day camera is mounted on the hull of the new variant for use during reconnaissance mission.

Nigerian Army ordered for 28 examples of the first variant in November 2019, and subsequently inducting them on December 4 during the opening ceremony of the 2019 Chief of Staff Annual Conference in Kaduna state.