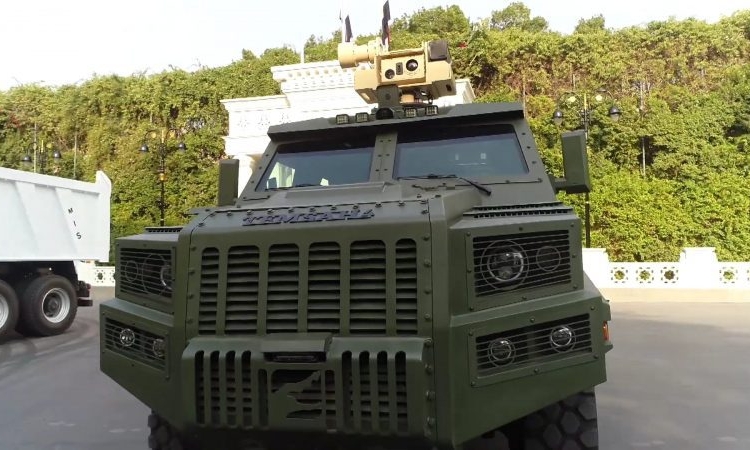 In continuation of its drive to develop a national defence industrial capability to design and build indigenous systems, Egypt has unveiled a new variant of the Temsah armoured vehicles series. The Temsah-4 4×4 armoured vehicle was unveiled on 6 December by the Kader Factory for Developed Industries, part of the Egyptian Ministry of Defence Industrial Engineering Complex, and it is optimized for special operations and security forces.

Similar in size to the Temsah 1 armoured vehicle first unveiled in 2015, the Temsah 4 hull is protected against 7.62 mm armor piercing rounds and splinters, it can transport six soldiers in addition to a crew of two. The vehicle features a roof-mounted day/night and infrared camera system for reconnaissance and surveillance missions.

The Temsah-1 is a 4×4 Mine-Resistant Ambush-Protected (MRAP) vehicle with a GVW (gross vehicle weight) of 13.3 tonnes including 2,200kg payload, it can transport six dismounts in addition to a crew of two. The vehicle is powered by a 230hp turbo-diesel engine, the vehicle is said to have a top speed of 80km/hr (50mph) when fully loaded and a range of 600km (375 miles).

Providing a BR7 protection level; its V-hull gives landmine protection while the hull is protected against 7.62 mm armour piercing rounds and splinters, while mine protection is STANAG Level 4, soldiers can fire their individual weapon through a gun port. Three four day/night cameras are installed for all round surveillance; the images being shown on a 9” screen in the crew compartment.

Leveraging on the experience gained from the Temsah-1, the Egypt developed the Temsah-2, which is basically a stretched version of the Temsah 1, with most technical data remaining the same except for the engine output, increased to 240 hp, the GVW (gross vehicle weight) now 16.475 tons with 2.675 tonnes payload, and the crew, the vehicle carrying two extra soldiers, with the addition of two more weapon ports in the rear compartment.

The Temsah 3 PPV is noticeably smaller than the rest of the family, it was unveiled at the EDEX 18. Weighing 6.4 tonnes, including 1,400kg payload, the 4×4 TEMSAH 3 is powered by a 6.5 litre, 205hp turbo-diesel engine providing a road speed of 110km/hr (69mph) and cruising range of 440km (275 miles). Ballistic protection is BR6 and up to four passengers can be carried in addition to the crew of two. The vehicle is equipped with a Remote Weapon Station, and mounted soldiers can fire their weapons through gun ports at the side ports at both side of the vehicle.

The Light Temsah is a 3.2 tonnes vehicle with a 500 kg payload capable of carrying two crew member and three soldiers under a BR6 protected cell. The 235 mm ground clearance suggests that it does not have any mine protection capability. The Light Temsah features three gun ports, and powered by a gasoline engine providing 228 hp, which gives it a considerable power-to-weight ratio allowing a maximum speed of 165 km/h.