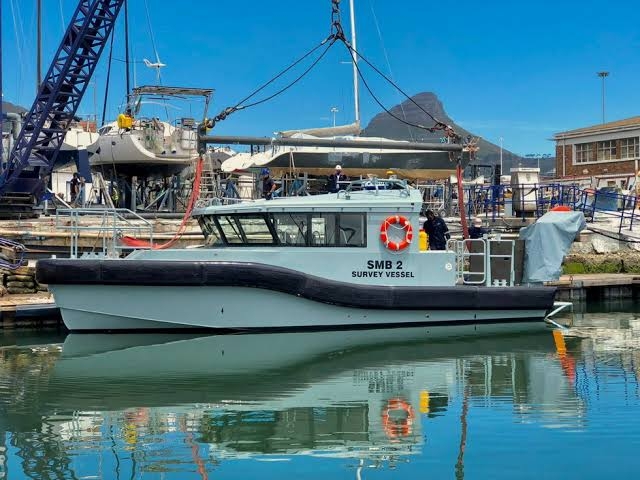 The second survey motor boat for South Africa’s Project Hotel has been launched by Paramount Marine and Veecraft Maritime in Capetown on 16 November.

Project Hotel involves the acquisition of a new hydrographic survey capability for the South African Navy.

According to Sandock Austral Shipyards (SAS) -the Prime contractor for Project Hotel, the vessel (SMB2) will continue to harbour trials and sea acceptance testing with SAS providing specialised systems engineering and project management before delivering it to the SA Navy for utilisation.

“The SMBs are considered the first of their kind to be built locally in terms of sheer survey complexity and raise the bar for shipbuilding excellence,” SAS said.
The first vessel of the class was launched on 24 August, and ultimately, the three vessels will be built.

Two SMB will operate aboard South Africa’s new hydrographic survey vessel being built by SAS in Durban to replace the SAS Protea, with a third ashore in reserve.

Sandock Austral Shipyards chief executive Prasheen Maharaj said: “The new hydrographic survey vessel puts South Africa on the global map of maritime sophistication and excellence and we are proud to have a competent and passionate team on the job.

Maharaj also explained that there will be significant progress over the next few months in spite of setbacks experienced due to COVID-19.

The launch of the second SMB, Maharaj said is a clear indication of progress” in rejuvenating the SA Navy’s hydrographic capabilities. “Sandock Austral Shipyards congratulates all role players that made this exciting milestone possible.”