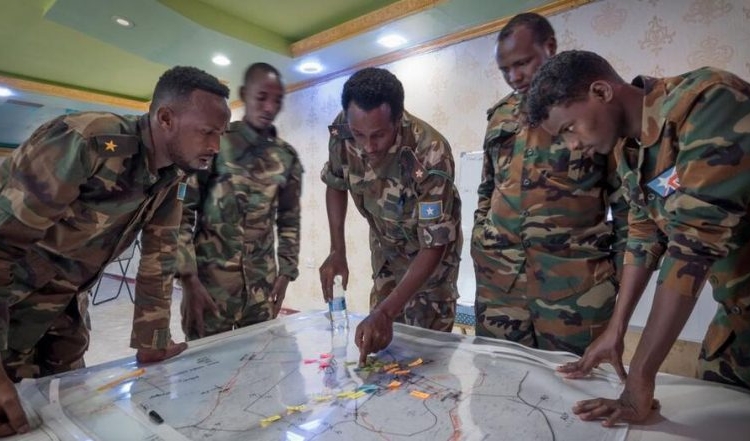 The United Kingdom has increased its support to the Somalian National Army (SNA) by providing much needed command and staff training to the country’s 8th Brigade.

The command and staff training was completed in Mogadishu, and after the course completion, participants returned to their UK-provided barracks in the headquarters in Baidoa, the capital of Southwest State in Somalia.

The brigade-level command and staff course comprised of planning and conducting stabilisation operations, and was delivered by British Army personnel deployed on Operation TANGHAM.

Nineteen SNA officers were trained to operate alongside the Somali Police Force and African Union Mission in Somalia (AMISOM), and other international partners in the fight against Al Shabaab.
Lieutenant Colonel Alex Hutton, the British Army commander who was responsible for the training, explained that the Command and Staff course has given the officers from 8 Brigade a strong foundation in planning and control of Brigade-level operations.

He also said that “My team and I are now looking forward to developing their skills and continuing to advise them in-person from our training base in Baidoa.”

The Somali Minister for Defence and the British Ambassador to Somalia were present after the training to give moral support to the senior officers.

The British Ambassador to Somalia, Ben Fender OBE, said: “Effective planning and oversight of operations is vital to defeat Al Shabaab, and our ground-breaking course for SNA officers will give them the skills that they need in order to plan and conduct effective operations.

“The UK is helping to develop the core of a strong professional army that can keep Baidoa and its surrounding areas safer. We are committed to supporting Somalia in its fight against Al Shabaab.”

This latest training follows a series of British intervention to Somalia, intended to bolster the SNA operational capabilities, particularly the 8th Brigade, on the battlefield. In 18 September, the UK gifted the SNA equipment which included uniforms and radios, and a fleet of vehicles including trucks, ambulances and land cruisers.

The UK also transferred in March 2020 a military barracks capable of housing up to 450 Somali troops, and acts as the military headquarters for the 8th Brigade in South West State.

So far, the UK’s Baidoa Security Training Centre (BSTC) has been operating in Somalia for one year and has already trained more than 400 soldiers from 8 Brigade in Baidoa alone.

The infantry training began in January 2019, with the new Baidoa Security Training Centre being completed in the following month.