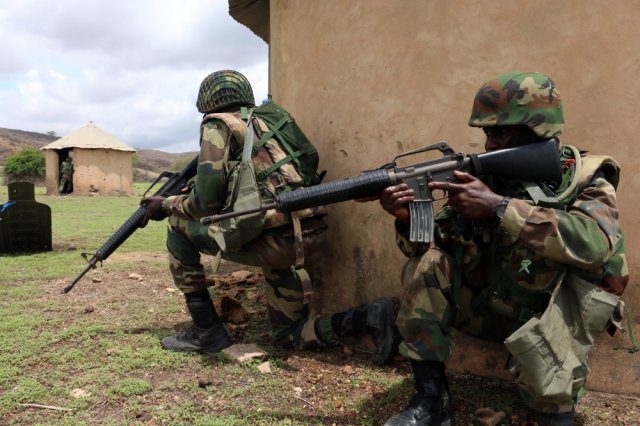 The United States has just completed the delivery of 2,200 M4 carbines to the Senegalese military through its Foreign Military Sales (FMS) program.  The small arms were requested by Senegal alongside complimentary training for onward deployment to Mali.

The U.S. Defense Security Cooperation Agency approved the delivery of the M4 carbines in June 2018, whereby the Tank-automative and Armaments Command prepared the weapons from Colt’s West Hartford, Connecticut facility. After the approval, 50 Senegalese soldiers began receiving familiarization training on the M4 in September 2018 at the Mount Rolland Training Site, Theis, Senegal. The M4 carbine will replace the M16A1 rifle being used by the Senegalese military.

The M4 carbine is a shorter and lighter variant of the M16A2 assault rifle, it is chambered in a 5.56×45mm NATO, air-cooled, direct impingement gas-operated, magazine-fed carbine. It has a 14.5 in (370 mm) barrel and a telescoping stock. Furthermore, the M4 carbine provides individual soldier operating in close quarters the capability to engage targets at extended range with accurate, lethal fire. To ease logistics, the M4-series Carbine achieves over 80% commonality with the M16A2 Rifle.

Under USASAC’s Total Package, personnel of the Vermont National Guard conducted the four days of training,  under the State Partnership Program, which is a joint Department of Defense program managed by the National Guard Bureau.

Senegalese soldiers are preparing to move into Mali to support the Multidimensional Integrated Stabilization Mission (MINUSMA).