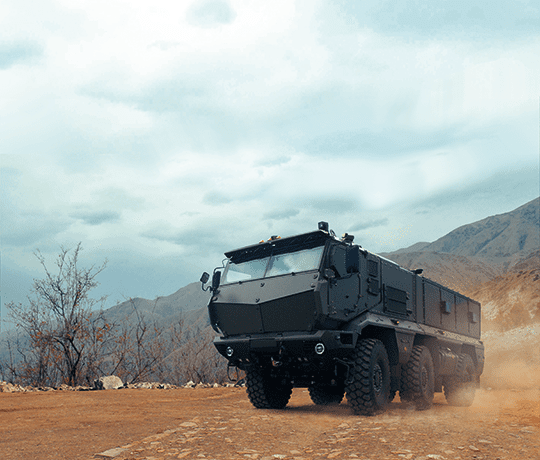 The Russian Airborne Forces (VDV) in 2021 will begin receiving the 4×4 K4386 Typhoon-VDV armored vehicles that can be air-dropped with troops inside, said VDV’s commander colonel general Andrey Serdyukov. Typhoon-VDV belongs to the large Typhoon-K MRAP vehicles family, which, as Military Africa reported earlier this year, is particularly aimed at the African customers.

According to insider sources, the Typhoon-VDV is still under development, however, other vehicles in the Typhoon family is ready for export as of today.

“This year in order to conduct troop trials the troops are receiving protected Typhoon-VDV special purpose vehicles, which can be parachuted, and from 2021 serial deliveries of the vehicles are planned. These vehicles are equipped with a remotely controlled weapon station with an automatic 30-mm cannon and a PKTM machine gun, a 350-horsepower engine and an automatic transmission, capable of accelerating this vehicle to 100 kilometers per hour”, – said Serdyukov in the interview to the Red Star, the official newspaper of the Russian Ministry of Defense.

A range of Typhoon-K family vehicles, that are available in the 6×6 (KAMAZ-63969) and 4×4 (KAMAZ-53949) wheel configurations, are offered by Russia at the global market. Typhoon vehicles were presented by Russia to the African countries at the Russia-Africa Economic Forum, which took place in Sochi in October 2019.

The Typhoon-K MRAPs were developed and produced by Remdizel Company, based in Naberezhnye Chelny, Tatarstan (Russia). They are designed to provide integrated logistics support to combined arms and special units, including peacekeeping formations, in various environments. They provide a high-security level for the crew and cargo from small arms fire, from anti-tank and land mines. The Typhoon-K MRAPs were initially developed from the ground-up as MRAP but due to their flexibility, they can be easily reconfigured for various roles such as armored personnel carriers, armored ambulances, infantry combat vehicles, armored recovery vehicles. Typhoon-K vehicles can operate in various climatic conditions, including those found in Africa.

Among the weapon systems that can be fitted into Typhoon-K vehicles are various remote-controlled weapon stations (with both machinegun and artillery armament) and missile launchers. The 4×4 Typhoon-K with Kornet-EM long-range missile system was earlier demonstrated at the ARMY international military expo in Russia.

According to the source of Military Africa, at the customer’s request the licensed production of these vehicles can be organized abroad. Russian media earlier reported, that the license manufacturing of Typhoon vehicles had been organized in Uzbekistan.

Over the past few years, Russian defence manufacturers have began making headway into the African markets traditionally dominated by Frence, American, and Chinese products.

The platform can perform a range of combat missions as well as peacetime operations. It can accommodate up to 11 soldiers with the troop compartment located at the rear of the vehicle.