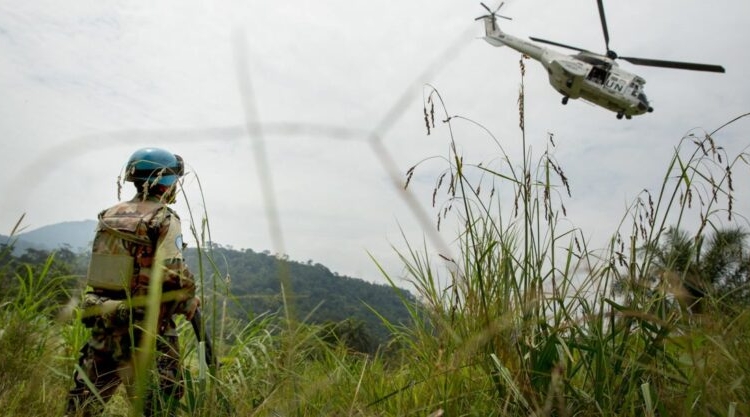 A Uruguayan peacekeeper based in Pinga watch as USG Herve Ladsous's helicopter makes its way back toward Goma after a field visit in the area . The town of Pinga was recently deserted by NDC milicia and secured by MONUSCO, the 4th of December 2013. © MONUSCO/Sylvain Liechti

A United Nations transport helicopter was attacked by Jihadist in the Northeastern part of Nigeria today Saturday, 7 July.

Two civilians including a five-year old child were killed in the attack launched by Islamist fighters in the town of Damasak on Thursday.

Edward Kaolin UN humanitarian coordinator in Nigeria said in a Press statement that both the fatalities and several others who were injured in the attack were on the ground.

“A UN Humanitarian Air Service helicopter was hit by bullets during the attack. No aid workers were on board at the time and crew members are all safe,” Kallon said in a statement.

The helicopter was shot as it approached Damasak and the pilots managed to fly back to regional capital Maiduguri 150 kilometres (90 miles) away.

For the time being, the United Nations is suspending rotational flights for one week “to engage with government partners and conduct new risk assessments”.

The 10-year jihadist conflict has killed 36,000 people and forced some 2 million from their home in the region.

Key roads remain too dangerous to travel despite the Nigerian military repeatedly insisting it has largely defeated the insurgents.

The UN has complained of an uptick in attacks targeting aid workers in the northeast of the country.

The area around Damasak on the border with Niger is dominated by the Islamic State West Africa Province (ISWAP), which broke away from the jihadist group Boko Haram in 2016.In this article:

In 2016, the UN stated that flying in aid workers by helicopter to remote, hard-to-reach areas previously cut off from help by Boko Haram violence across northeast Nigeria has provided more than 45,000 people with aid over the past week.

Many of those receiving aid have received little or no assistance so far, the U.N. World Food Program (WFP) said.

A military push against the jihadist group Boko Haram has enabled troops to enter remote parts of northeast Nigeria in the last few months, but insecurity and the fear of violence has restricted access to some areas by road for many aid agencies