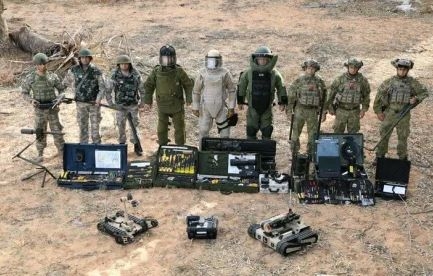 Libya’s Government of National Accord (GNA) has enlisted the help of various unmanned ground vehicles to clear unexploded ordnance ( UXO) left behind by retreating Haftar’s forces.

One of such UGV is Safariland’s Digital Vanguard (DV-S) UGV seen in photographs released by the Libyan Ministry of Interior on 1 June. The Digital Vanguard UGV is operated by the Explosive ordnance disposal (EOD) team in Ain Sarah, in southern Tripoli.

Another UGV apparently being used to clear IEDs in Libya is the AB Precision’s Sentinel, a variant of the Resolve UGV. This particular UGV was seen in photograph released by the GNA’s Ministry of Interior on 2 June.

AB Precision’s Sentinel, was seen in a photograph released by the Ministry of Interior on 2 June. The Sentinel is a heavy-duty Improvised Explosive Device Disposal (IEDD) robot, it features a 6 degrees of freedom arm, which is electronically controlled by actuators and has a lifting capacity of 100kgs retracted and 30kgs extended.

The freedom arm allows the Sentinel to reach what would otherwise be inaccessible locations. The vehicle itself can be easily controlled through a briefcase-style based station and TFT display, with full electric actuator control also available with the use of a portable hand controller.

In 2017, the United Kingdom provided six Resolve UGV to the Tripoli-based government to clear IEDs from the central coastal city of Sirte as part of a GBP3 million (USD3.76 million) says Jane’s.

Likewise, EOD team from the Turkish Ministry of Defence are currently deployed in Southern Libya in support of the GNA.

The Turkish team were deployed with a vast array of counter-IED UGVs from various sources.