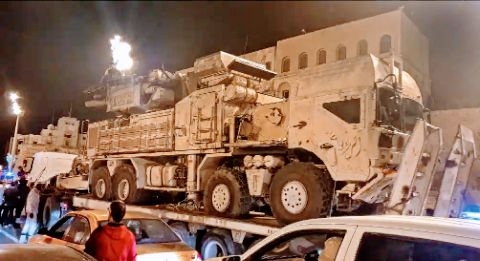 A leaked video which was published online yesterday 11 June, confirmed the report.

The video, at some point showed the interior of the Pantsir S1 system which is fitted with LCD screens and in Latin language similar to the one the UAE operates.

In the video,the Pantsir crew tracked a target 4km away using the system’s radar and infrared sensors.

When permission to engage was given, a missile was fired which appears to hit the target.

The Emirates Pantsir S1 air defence system has been deployed to Libya in support of Khalifa Haftar, supplied by Russia, the UAE version are unique because, they are mounted on MAN trucks instead of the legacy tracked armoured chassis.

A Pantsir S1 system was captured by GNA forces after they overran al-Watiya air base in May, a former Haftar’s stronghold. The captured Pantsir was subsequently paraded in Tripoli on 20 May.

The Pantsir S1 air defence system has been credited with many drone kills including the Turkish made Bayraktar TB2, however, in recent months, Bayraktar TB2 with the help of Turkish electronic warfare equipment has managed to destroy several of the Pantsirs.

Likewise, Russian affiliated personnel most likely from the much talked about Wagner Group are providing Haftar’s forces with equipment training, maintenance and other related services.