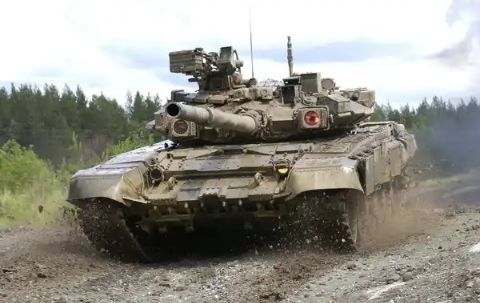 The deal will see Uralvagonzavod (UVZ) corporation building a facility in Egypt to assemble up to 500 T90MS tanks before the end of 2021, although, some parts for the tanks will still be imported from Russia.

So far, details like the value of the deal has not been disclosed. In June 2017, reports of Egypt’s interest in the Russian T-90 main battle tank first came to light. Apparently, Egypt is impress with the T-90 MBT’s performance in Syria.

The Egyptian Army (EA) has a large stock of American made M1 Abram Main Battle Tanks about 1100 in total all built in Egypt. The EA is likely considering the T-90MS MBT because it is light enough to be transported by its new Mistral Class Helicopter Carriers since the M1 Abrams is too heavy to be transported by the ships.

The newly assembled T-90MS will replace outdated tanks in Egyptian Army service including T-55/54, T-62, and M60s. The T-90s will equip Egypt’s Army armored divisions while the M1 Abrams will be transferred to the mechanized units under the armoured Corp.

It is equipped with a 1,130 hp engine, a PNM Sosna-U gunner view, a UDP T05BV-1 RWS with a 7.62 mm machine gun, GLONASS, inertial navigation systems, new Relikt explosive reactive armour (ERA) that covers more of the tank, and a steering wheel. A new removable turret bustle is included, which provides storage for eight additional rounds.