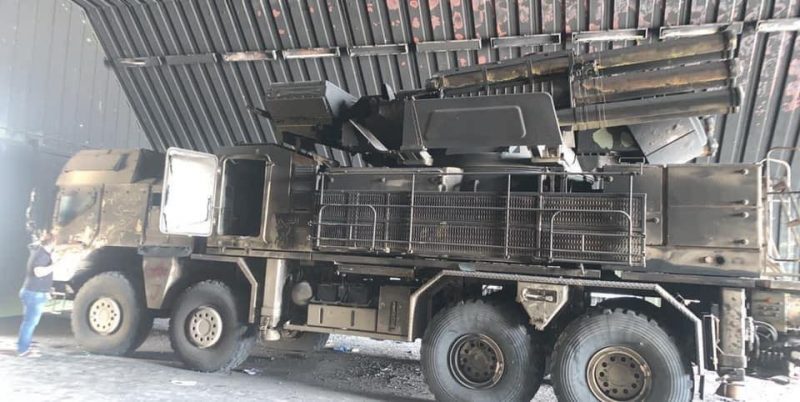 Forces of the Government of National Accord (GNA) recently captured al-Watiya air Base, on Monday 18, after a fierce battle. The Turkish-backed group scored a significant hit when they retrieved several military hardware from the base.

Al-Watiya airbase is located in the northwest of Libya’s Yafren province, 140 km from Tripoli, with an estimated capacity of 7,000 to 10,000 troops. It plays an important role in controlling northwestern areas of Libya, and the GNA forces, backed by Turkey, have been trying since May 5 to seize this strategic axis from the Libyan National Army.

Following the seizure of al-Watiya from the LNA, several weapons were captured including a UAE-supplief Pantsir-S1 low-level air defense system. This particular system have been the target of several drone target, first on May 16, a GNA Bayraktar TB2 combat drone targetted the system when it arrived al-Watiya, the Pantsir-S1 system was struck with a missile when it was being driven into a hardened shelter.

The May 16 drone strike was carried out with the intention of neutralising the air defense system before it could become operational. However, the missile likely missed, hitting a nearby armed pick up truck instead. Thus, the Pantsir-S1 system suffered only slight damage, it was subsequently captured just two days later when the forces of the GNA seized al-Watiya airbase.

The Pantsir-S1 system is now being paraded as a war trophy and has since been paraded to more secured location behind the Frontline.

The Pantsir-S1, known to NATO as the SA-22 Greyhound, combines both guns and missiles. Being a low-level air defense system, it can defend battalion-size troops formations from enemy cruise missiles, drones and close air supports aircraft and helicopter attacks.

So far, the United Arab Emirates has supply several Pantsir-S1 systems to the LNA over the past two years, the first was publicly displayed in June 2018, they are mounted on the German built Man-SX 8×8 trucks which are unique to the UAE stock.

Till now, the Pantsir-S1 systems are still being targeted in Libya, In another drone strike video which emerged today, Turkish-backed forces appear to hit another near the city of Sirte. This is around 300 miles from al-Watiyah airbase. It is seen being targeted as it is moved on lowboy trailer, when it appears at its most vulnerable.