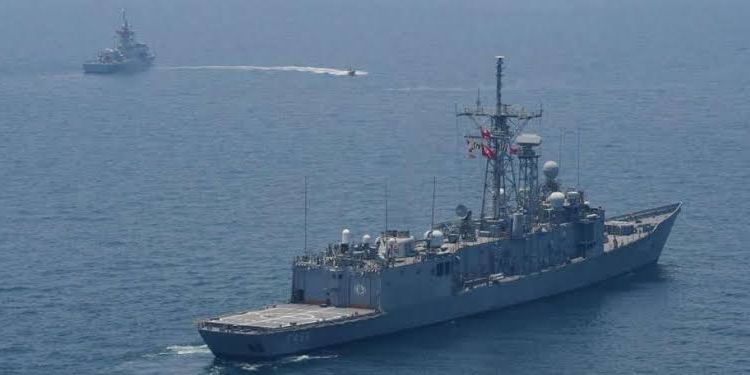 In the early hours of today, a Turkish Navy frigate sailing off coast of Sabratha 55 km west of Tripoli, the Libyan capital reportedly fired at least one RIM-66E-05 Standard surface-to-air missile, supposedly against an Libyan National Army (LNA) UAV.

Photographs of the near-intact missile was published online by forces of the LNA. similarly, the Turkish Navy frigate which launched the missile was also photographed in the vicinity.

The warship in the photograph appears to be a  G class (Turkish: Gabya sınıfı fırkateyn(ler)) general purpose guided missile frigate.

The G class is an extensively modernized versions of ex-Oliver Hazard Perry-class guided-missile frigates of the US Navy, mainly designed for air defense with a weapons configuration that is optimized for general warfare.

Later today, the Turkish Navy released a photograph of the frigate launching the RIM-66 Standard missile, however, the target of the missile launch was not disclosed.

The RIM-66 Standard MR is a medium-range surface-to-air missile (SAM), with a secondary role as anti-ship missile, originally developed for the United States Navy (USN).

The first GENESIS upgraded ship was delivered in 2007, and the last delivery is scheduled for 2011.

An 70B Seahawk or AB-212 utility helicopter configured for anti-ship, anti-submarine and electronic warfare is also usually carried aboard.

This latest altercation indicates a significant escalation in the conflict especially as the GNA and Turkey increases efforts to achieve air superiority over Tripoli.

In February this year, forces of the Libyan National Army (LNA) attacked a Turkish ship in Tripoli’s Seaport, suspected to be bearing weapons for the Government of National Accord (GNA). The ships were attacked with surface-to-surface rockets.

Note that earlier on 28 June 2019, the spokesman of the Eastern Libyan forces, Ahmed Mismari said that Commander Khalifa Haftar will ban any commercial flights from Libya to Turkey and that any aircraft or ship arriving from Turkey attempting to land or berth in the capital Tripoli would be treated as hostile.