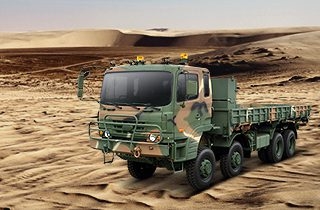 The Ivorian military will receive 100 military trucks from South Korea’s KIA by the end of this year to replace the French-made ACMAT vehicles in its inventory.

The order for the KIA trucks is reported to worth 5 billion CFA francs or $10 million according to local media reports. The KIA vehicles were initially ordered by the Ministry of Defence, but the sale was vetoed by the General Vagondo Diomande, Chief of Staff of the Presidency and Commander of the country’s Security Group (GSPR).

The contract was eventually unblocked by the president Alassane Outtara on the advice of his brother Birahima Outtara.