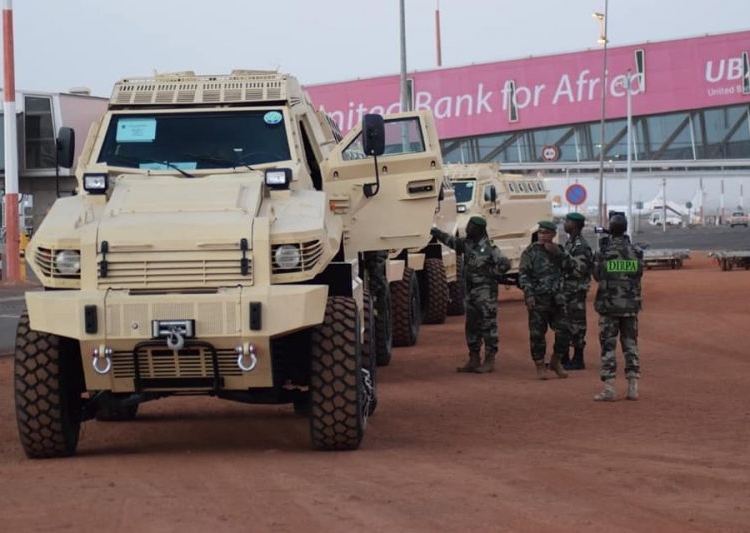 The United Arab Emirate (UAE) has delivered at least seven out of 30 Streit Group Typhoon Mine Resistant Ambush Protected (MRAP) vehicle to the Malian Armed Forces (FAMA) on Friday, 17 January.

The seven Typhoon MRAPs were ferried by an Antonov-225 Mriya strategic airlift cargo aircraft, which landed at the Modibo Keita international airport.

According to photographs published on Social media, the Antonov-225 aircraft could be seen offloading the grey colored Typhoon 4×4 vehicles, with FAMA officials supervising the process.

The Typhoon 4×4 vehicles seen on the photographs were unarmed, it is a 4×4 multi-purpose armoured personnel carrier in the category of MRAP designed and manufactured by the Company Streit Group.

The Typhoon is equally at home in urban, mountainous and challenging rural terrains and has excellent field reparability. With the capacity to carry up to 12 personnel plus equipment, the Typhoon can be configured for a wide range of missions, including Command and Control, EOD, Patrol, Convoy Support, Forward Observation, Reconnaissance and MedEvac.

The pledge to donate the vehicles was made in December 2019, and was publicly announced by the Malian Prime Minister Boubou Cissé on the National TV.

During the announcement, Boubou disclosed that “the UAE promise they will give us, as soon as possible, about 30 armored Cougar-type vehicles to support our defense forces.

They are very willing to grant us technical and financial assistance in the fight against terrorism and walk along us through this combat that we are waging on behalf of all the nations across the world,”

The new delivery will help stem the tide of an upsurge in jihadist attacks in Mali and the Sahel. Mali is still negotiating for the acquisition of 100 more armored vehicle from the UAE to meet its security needs.