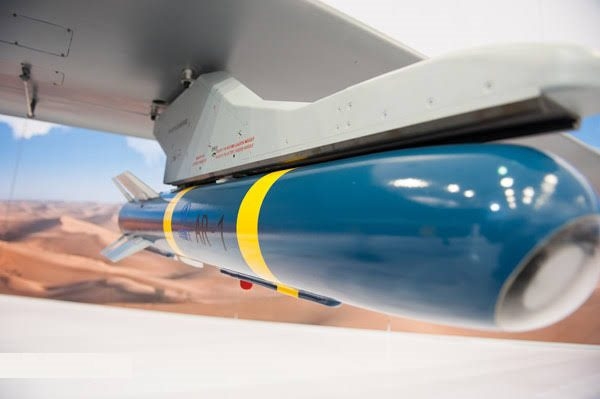 The Chinese AR-1 Missile is now being offered alongside a family of Unmanned Combat Aerial Vehicles (UCAVs) such as the Cai Hong (Rainbow) CH-3, CH-4, CH-5 and Wing Loong.

In today’s fast changing technological landscape, having an edge (no matter how small) over any adversary is essential to achieving victory on the battlefield.

Traditionally, high-tech military weapons are usually the preserve of Western military powers, such as the United States, U.K, France, Germany and Russia. In coping with this monopoly, African nations are slowly turning towards China to fulfil their military needs. Additionally, the US arms export approval process is usually slow and are attached to political strings.

Unlike the United States, China is not a signatory to the international Arms Trade Treaty (ATT), meaning it has little or no restriction on the sales of armed drones and related technologies.

With China still finding its footing in the overall scheme of things in the defense sector however, Chinese sophisticated and inexpensive drones are expected to dominate the global market. Granted, even the US still has an upper hand when it comes to drone technology.

For example, the Chinese Wing Loong, a counterpart to the US Predator drone is price at just $1 million while the CH-5, which is one of the deadliest drone in the world cost less than half the price of an MQ-9 Reaper drone ($30 million apiece) but with similar performance.

The AR-1 missile can also be fitted to Chinese attack helicopters. It is highly effective against a wide range of targets like personnel, armoured vehicles, bunkers and infrastructure.

In February 2, the Nigerian Air Force (NAF) released a video of an Unmanned Combat Aerial Vehicle (UAV) destroying what is believed to be a Boko Haram logistics base.

With the rise in terrorism globally, combined with the U.S military ever increasing use of drones and Precision Guided Missiles (PGMs) in combat operations in places like Iraq, Afghanistan, Somalia and Pakistan, China foresaw a need for a lightweight compact guided missile.

This realization prompted China to increase research into Unmanned Aerial Vehicles (UAV) and Precision Guided Weaponries. In early 2016, the AR-1 Missile was developed as an adaptation of the successful 3rd generation HJ-10 Arrow-10 series of Chinese anti-helicopter and anti-tank missiles, indigenously developed by Norinco for People’s Liberation Army.

The AR-1 missile was designed specifically for the China Aerospace Science and Technology Corporation (CASC) CH-3 Rainbow attack UAV which was unveiled at the 7th Zhuhai Airshow held at the end of 2008, when the AR-1 missile also made its debut.

The AR-1 missile is basically a Hellfire clone; it is equipped with either a GPS or a Laser guidance system. The missile was first reported in the late 1990s as a development of the HJ-10 guided missile. As with Chinese military doctrine, the AR-1 missile has evolved into different designs, but similar characteristics. Offering capabilities as a substitute to customers who may not be able to acquire expensive U.S. AGM-114 Hellfire missiles for their UAV fleet.

Instead of having a much larger set than the other, the sizes of two sets of control surfaces of the AR-1 missile are similar. The set of control surfaces at the front is swept instead of trapezoid-shaped like in the HJ/AKD-10, and they are closer to the tip of the missile.

Although the developer has claimed that the AR-1 Missile can be armed with several types of seekers, such as TV, Imaging IR (ImIR), and semi-active laser homing, only the TV guided version was shown to the public. Contrary to some internet users’ opinion, the AR-1 Missile cannot be guided by MMW radar because the radars are too heavy and bulky to be carried by UAVs.

Even though the Norinco claimed that the AR-1 missile can adopt different guidance systems, only a combination of inertial guidance + satellite guidance (GPS was shown during its debut) has been confirmed to be in use.

The AR-1 missile can be used against various targets from individual soldiers to tanks and small boats. At the 7th Zhuhai Airshow where the AR-1 missile made its debut, it was not displayed as an independent weapon system, but as a subsystem of the CH-3 UCAV.

Judging from its appearance, it is safe to assume that the warhead arming the AR-1 missile is similar to that of the AKD-10.

This move has bolster the sales of Chinese UAVs, missiles systems and sensors and also increased customer’s dependability and reliance.

As the confrontation between the Egyptian military forces and Wilayet Sinai – the local arm of ISIS escalates in the Sinai Peninsula, the Egyptian Task Force 777 has procured Wing Loong a Chinese built UCAV.

The Wing Loong is a medium-altitude long-endurance drone use for ISR and ground attack role, it can be fitted with various missiles like the AR-1 missile, BA-7 Air-to-ground missile, YZ-212 laser-guided bomb, YZ-102A anti-personnel bomb and 50kg LS-6 guided bomb.

The CH-4 drone has an external appearance similar to the US Predator drone. The CH-4 drone is used for Intelligence, Surveillance and Reconnaissance missions. It can carry up to four to six AR-1 missile and 100-pound laser-guided bombs.

The first evidence that the Nigerian Air Force has acquired the Chinese CASC CH-3 Rainbow was on January 27, 2014 when a Twitter user in Borno State released photos of what appeared to be a crashed drone. The drone crashed during a strike mission against islamists terrorist in the Northeast of Nigeria, it was carrying a pair of the AR-1 missile.

In January 2017, Nigeria might have deployed a single CH-3 UCAV to Gambia as part of the air component of forces sent to the country restore civil order. The CH-3 Rainbow is part of the Nigerian Air Force local air dominance mechanism in the fight against Boko Haram, the CH-3 is used alongside numerous attack helicopters and the Dornier Alpha jet.